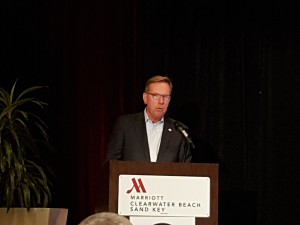 During the AASA Technology Conference held Oct. 2-4 in Clearwater Beach, Fla Bill Long, president and chief operating officer of the Automotive Aftermarket Suppliers Association (AASA) spoke on how “Technology Leadership is Vital to the Aftermarket.” He reviewed the past, present and said the future of the aftermarket is bright for those who embrace change.

In the early 1980s, during the advent of onboard diagnostics, many people said that would crush the aftermarket because vehicle owners would more easily be able to diagnose their vehicle’s problems and presumably fix them, Long said. That prediction did not come true, but resurfaced once again in 1996 with the introduction of ODBII and the Clean Air Act amendment.

Automotive suppliers are key players because they manufacture more than two-thirds of the value in vehicles today. In addition, the automotive aftermarket is the largest sector of manufacturing jobs in the U.S., accounting for 734,000 direct jobs and 3.6 million total jobs. So the industry has done well by continuing to grow in the face of changing technology and dire predictions.

Despite that growth, “there are significant opportunities available to us all as represented by the estimated $67 billion underperformed or deferred maintenance,” Long said.

Worldwide, the aftermarket’s possibilities are staggering with more than 1 billion vehicles on the road, including 120 million in China.

“Although we are in a good place, for me to suggest that it’s business as usual in our industry would be a gross misrepresentation,” Long said. “Never before can I recall a time in my career where the range of possibilities were so great, where the risks of standing still were higher than the risks associated with change.”

Millennials, more than 80 million strong, now exceed the baby-boomer generation. They have different buying habits, perceptions about car ownership, and ideas about vehicle maintenance and repair.

“At the center of the technology discussion and range of possibilities lies disruption,” Long said. “Today, we now have driver assist capability being offered to the broad market on the announcement from several OEs that automatic emergency braking will be offered as standard equipment.”

These vehicles are already finding their way back to dealerships and independent garages for maintenance and repair, and in several cases dealers were not equipped with the training and education to make the needed repairs.

The race to automated and autonomous driving is guided by the challenge and opportunities to eliminate vehicle and pedestrian fatalities. Each year, approximately 33,000 people are killed in motor vehicle accidents nationwide.

There also is the issue of cost. Motor vehicle crashes cost U.S. drivers and insurers $910 billion, approximately $4,000 per vehicle each year, which is nearly 6 percent of real gross domestic product. Advanced driver assistant systems (ADAS) that are available today could reduce that amount by about 30 percent and reduce fatalities by one-third, Long said. “To reduce the societal harm of vehicle crashes, all stakeholders will need to take action.”

All this new technology will cause the do-it-for-me (DIFM) market to increase its share of the aftermarket from 74 percent in 2013 to 78 percent in 2025 at the expense of the do-it-yourself (DIY) market, which will drop from 26 percent to 22 percent.

Dealerships will seek a bigger share of the DIFM market, but are limited by bay capacity and locations.

Some familiar aftermarket companies are leading the ADAS technology challenge. Bosch (545 patents) and Continental (277 patents) have a total of 822 patents for autonomous driving. Audi is in second place with 292 patents and General Motors in fourth place with 246 patents.

“A more connected car could lead to an increase in key business drivers for the aftermarket,” Long said. That’s because prognostics that alert motorists and service providers of pending failures could lead to more underperformed maintenance being done.

“We are part of a large stable high-tech industry, with strong foundational drivers,” Long said. “Our industry is experiencing rapid change, but we have been here before and prospered from our ability to react and innovate. Refresh your strategies with an assessment of the full range of possibilities. Get involved, get others involved and be a part of the solution.”