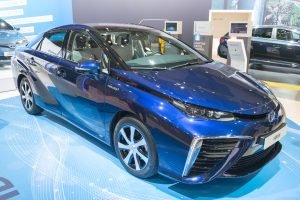 Ten companies will be competing for market share in hydrogen-powered vehicles by 2021. But how big that market will be remains to be seen.

Since hydrogen fuel cell vehicles were launched in 2016, Information Trends reports that 5,500 sold worldwide. The group estimates that number to top 6,000 by the end of the year. In the first nine months of 2017, almost than 2,400 hydrogen vehicles were sold.

These numbers a bit surprising to Naqi Jaffery, lead author of Information Trends’ report Hydrogen Fuel Cell Vehicles: A Global Analysis. That’s because refuelling infrastructure is not widely available, he said. However, by 2021 when more automakers will have hydrogen options available, those options should be far more widespread.

Half of all sales have been in the U.S., though hydrogen vehicles are concentrated in California’s San Francisco Bay Area, Los Angeles and Orange County regions. And even though Europe has more hydrogen refuelling infrastructure available, the continent accounts for only 10 per cent of all sales. Japan leads the world in refuelling stations. It, along with Korea, make up the other 40 per cent of sales.

Lexus, Hyundai, Kia, Honda and BMW are expected to be part of the battle for consumer dollars with hydrogen vehicles in 2021. Toyota leads the way with its Mirai, which accounts for three-quarters of all sales. The Hyundai ix35 Tucson and Honda Clarity split the remaining sales.