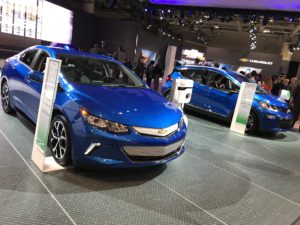 The Chevrolet Volt plug-in hybrid and Bolt electric vehicle on display at the 2018 Canadian International AutoShow.

When General Motors Canada workers in Oshawa put down their tools and headed home Monday morning after being told their plant will shut down next year, the automaker billed the closure and impending layoffs as part of a transformation towards a more tech-savvy future.

GM said it was doubling resources allocated to electric and autonomous vehicle programs with a focus on “virtual tools” that will lower development time and costs and improve quality and the speed it takes to get a product to market.

Experts say the move puts GM in a growing group of vehicle-makers revving up their technology-based efforts in a bid to conquer the crowded auto market, where consumers expect the latest in innovation.

Long before GM announced its pivot, Tesla was already disrupting the auto world with cutting-edge battery and powertrain technology and the first ever premium all-electric sedan. Meanwhile, Ford was focused on the transportation services market, investing in an on-demand transportation service for non-emergency needs called GoRide and driverless car start-up Argo AI. Even Volkswagen got in on the action, toying with on-board WiFi hotspots and fingerprint readers for added security, while some Mercedes Benz and Jaguar models were produced with seats that offer a massage.

“More and more companies have been paying attention to the notion of a connected car,” said Mahmood Nanji, the director of Western University’s Lawrence National Centre for Policy and Management and one of Ontario’s negotiators for the bailout of GM and Chrysler following the 2008 financial crisis.

“We are seeing the emergence of all of these different technologies from simple things like sensors on vehicles to pretty sophisticated things that tell you what is happening with your engine or that have the ability to navigate you.”

“More and more companies have been paying attention to the notion of a connected car.”

Nanji said many of the auto companies pivoting towards technology are doing so because they want to remain competitive, but also because they are reacting to demand.

He didn’t find GM’s Monday announcement surprising because he said the company was forced to re-evaluate its strategies when it fell on hard times during the financial crisis and governments that bailed it out were clear that if they helped GM, the brand would have to get it right and not come crawling back for more.

Now, Nanji said, “they are looking at where is the market going and thinking where can we go.”

Speaking to reporters on Monday, GM chief executive and chairwoman Mary Barra conceded that the industry is “changing very rapidly” and innovations in propulsion, autonomous driving and connectivity are pushing the company to ensure it is “well-positioned.”

“The vehicle has become much more software-oriented, when you think of that hundreds of millions of lines of code that are in a vehicle that operates today,” she said. “That’s only going to increase, so we need to make sure we have the right skill sets as a part of the General Motors workforce, not only for today, but for the future.”

Barrie Kirk, the president of the Canadian Automated Vehicles Institute, said he doesn’t expect the industry – or GM – to hit the brakes on its tech push any time soon.

“If you look at a typical new car today the percentage of technology is maybe five or six per cent, but by the mid-2020s between 40 and 50 per cent of a new car’s value will be technology,” Kirk said. “That’s going to be a huge change.”

“If you look at a typical new car today the percentage of technology is maybe five or six per cent, but by the mid-2020s between 40 and 50 per cent of a new car’s value will be technology. That’s going to be a huge change.”

He’s predicting the future will be “autonomous, connected and electric” and will do wonders for reducing accidents and cutting down on greenhouse gases. People who are elderly or living with impairments but still have mobility needs will also be well-served by the technology, he believes.

He attributes much of the tech-auto boom that is currently being seen to Alphabet Inc.’s Waymo venture, which he calls a “pioneer” because it unveiled a driverless car prototype without a steering wheel or gas or brake pedals in 2014.

Kirk recalls Waymo wasn’t taken seriously at first, but other brands quickly awoke to the intersection of tech and auto and started to innovate.

Now, everyone from ride-sharing platform Uber to Chinese internet services company Baidu are working on driverless vehicles, joining automakers in the race to profit from the integration of tech and cars.

While they haven’t rolled out the technology for daily consumer use yet, Kirk said he is encouraged by the speed brands are moving at and the importance they are putting on innovation and its potential.

“It’s amazing to look back at the last five years how much the whole sector has gathered momentum.”