Eight months after issuing a recall for the Bolt, General Motors has issued a second one for the electric vehicle. 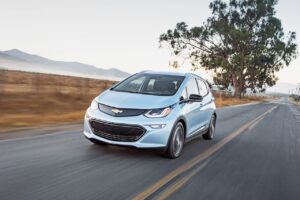 GM and its battery supplier partner LG have found “two rare manufacturing defects in the same battery cell” that were the cause of battery fires in these particular Bolt electric vehicles.

“As a result, GM will be conducting a new recall for the previous population of Bolt EVs (2017-2019) to address the risk of battery fires in these vehicles,” the automaker said in a posting on its website.

GM said it will replace defective battery modules in vehicles affected by the recall. It has not yet been announced as to when the replacements will be ready for customers to receive the repairs.

In the meantime, GM is asking customers to do the following to avoid potential issues:

The company is also asking customers, if they haven’t already, to visit their dealer to receive the advanced diagnostics software update. Then, they should limit the charging state to 90% and follow the above instructions.

The first recall was issued in November.