Gabriel giving away an El Camino 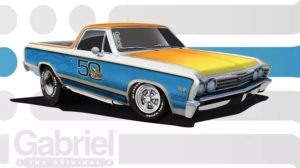 Gabriel Ride Control is celebrating the 50th anniversary of the HiJackers brand by hosting a sweepstakes for a custom 1967 El Camino truck.

The company is partnering with RTM, the producers of automotive television newtork PowerNation, on the giveaway.

“2017 is a big year for us to celebrate,” said Jonathon Gore, director of marketing at Gabriel, which is celebrating its 110th year as well. “It was a natural fit to commemorate this year in a giveaway of an iconic vehicle that embodies a hard-working attitude combined with a wild streak of power and performance.”

The El Camino will feature a six-liter LS and HiJacker shocks and will be built by Jeremy Bumpus and Lawrence “LT” Tolman, co-hosts of PowerNation TV’s Truck Tech show.

The contest is open until August 2017 and viewers can enter here.