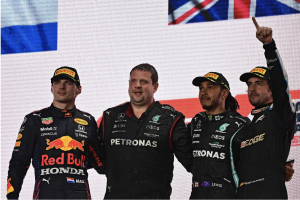 The 2021 Formula 1 Championship is still undecided with two races to go, with Lewis Hamilton’s win in Qatar reducing his deficit to Max Verstappen at the top of the table to just 8 points.

Hamilton started the race in pole position and his seventh victory of the campaign was never much in doubt after winning the first corner and blocking out the opposition. Verstappen had an excellent race and was able to overcome a five-place grid penalty to finish second, but he still finished 25 seconds behind a comfortable Hamilton.

The result leaves the Championship very much up for grabs entering the final two races in Saudi Arabia and Abu Dhabi and it could be a dramatic winner-takes-all scenario in the last race provided Hamilton can win in Saudi Arabia. However, Lewis finishing even second would probably spell victory for Verstappen- except in the unlikely event that the Red Bull driver is unable to finish in any point scoring position in Abu Dhabi.

Hamilton is looking to secure his 8th tile, while Verstappen, 24, is still in pursuit of his first Championship

Mercedes boss Toto Wolff has been full of praise for his driver Lewis Hamilton, citing his “super-hero powers” as the 36-year-old has been able to drag himself back into title contention against the odds.

“He is absolutely brutal. And cold-blooded. This is the best in Lewis, and we have seen it in the past and he is right there. When adversity happens, then it takes him to a place where he is able to mobilise super-hero powers”

Woolf will be hoping these powers are able to save the day for Mercedes over these final weeks of racing, with two drivers at the top of their game set to go toe-to-toe.

This comes off the back of a week in which tensions between the two have been raised over disputes surrounding racing etiquette. Verstappen has been accused of taking corners aggressively in qualifying and failing to adhere to acceptable driving standards.

Verstappen and Red Bull argue their strategy is “hard and fair racing”, but other drivers have claimed that they have been left unsure over what is considered to be legal in light of his driving. The Dutch driver said: “It is always trying to align everyone in having the same process. Everyone is different and has their own way of racing and defending and overtaking,”

On a meeting held between drivers and the FIA intended to offer clarification Verstappen said he feels that the group have been left under no illusions “I think at the end it was pretty clear.”

No,” Hamilton said. “It’s not clear. Every driver except for Max – most drivers – was asking for clarity but it wasn’t very clear. It’s still not clear what the limits of the track are”.

“It’s clearly not the white line anymore when overtaking. So we just go for it. We just asked for consistency. If it’s the same as the last race, it should be the same for all of us in those scenarios and that’s fine.”

Down to the Wire

The climax of the racing season is set to be one of the most exciting sporting conclusions of the year- and you’re going to want to follow along with all the excitement. For the best odds to bet on your pick, head over to William Hill for their F1 specials.