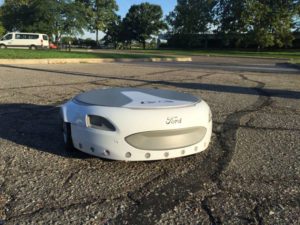 The Carr-E is an electric personal device that can transport passengers and heavy objects. It was developed by a German engineer.

Ford Motor Co. received more patents this year than any other automaker, a first for the Blue Oval as it increases the technology in vehicles and dabbles in alternative forms of transportation.

The U.S. Patent and Trademark office granted Ford nearly 1,500 patents so far this year, a 25% increase over the number of patents Ford received a year ago. That’s roughly 75 more than Toyota, 300 more than General Motors and 400 more than Honda — the three automotive companies that routinely top the list.

Ford workers in the U.S. submitted more than 8,000 patent applications, the most in Ford’s 113-year history and a 40% jump from a year ago.

“We are living the innovation mindset in all parts of our business across the globe,” Raj Nair, executive vice president, product development, and chief technical officer, said in a statement. “Our employees are delivering exciting new technologies for our customers at record levels. As an auto and mobility company, this is an exciting time, and our employees are aggressively advancing emerging technologies and increasing our mobility patents at record levels.”

While Ford won’t necessarily develop all of its patented ideas, some offer unique glimpses into how the company views the future of transportation.

In March, Ford filed patent No. 9272708B2 for an “autonomous vehicle entertainment system” that would “present media content on a first display while the vehicle is operating in the autonomous mode.” Ford thought that display could be an opaque, movie theater-like projection screen that would lower from the front of the car and hang in front of the windshield and steering wheel while the car drove itself.

Ford also received a patent for a drone that would attach to an autonomous vehicle and fly in front of it to map the surroundings as it drove. Passengers would control the drone using the vehicle’s infotainment and navigation systems.

Such innovations weren’t limited to the U.S. Globally, Ford’s received 3,200 patents so far in 2016. 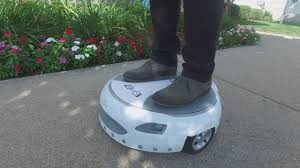 In Germany, a system engineer developed Carr-E, which looks like a small hoverboard or Segway that’s designed with the shape of a front grille. It’s known as an electric personal transportation device that can transport passengers and heavy objects. Separately, a team in Belgium developed eChair, an electric wheelchair that loads itself into a car.

Ford recently opened TechShop Detroit, a 33,000-square-foot workshop in Allen Park to let engineers tinker with ideas. It has a similar maker space in Nanjing, China.