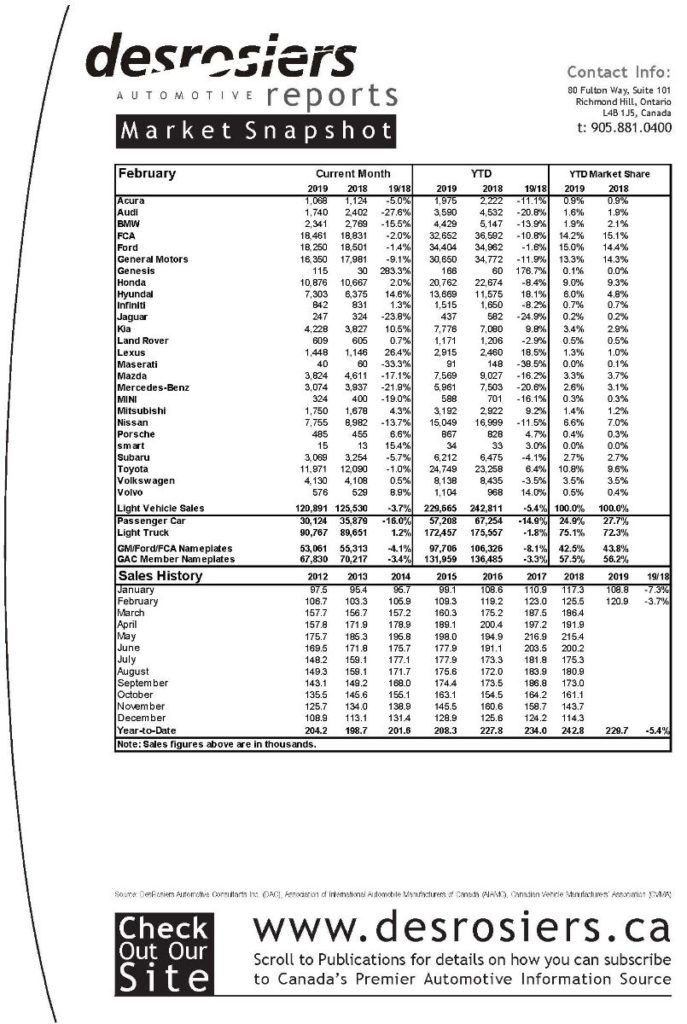 That’s 5,000 fewer than last February, according to DesRosiers Automotive Consultants. Both February 2018 and February 2017 saw more sales than last month did.

A number of double digit decreases from selected brands in February kept the overall market suppressed. However, Hyundai and Kia outperformed the market and witnessed sales increases at 14.6% and 10.5% respectively with Genesis claiming a 283.3% sales increase.

Lexus delivered a strong performance in February, claiming a 26.4% sales increase for the month aided by the introduction of their new Lexus UX.

Volvo and Porsche also displayed strong single digit sales increases for the month at 8.9% and 6.6% respectively; both brands have entered 2019 strong.

“Spring traditionally brings with it higher sales for the Canadian market with volumes typically peaking around May or June,” the DesRosiers report stated. “As of now however, first quarter results for the new light vehicle sales market are expected to fall short anywhere from 3% to 5% compared against 2018.”

In the U.S., lackluster February sales have led some forecasters to predict that 2019 could be a tough one for carmakers.

Several manufacturers have reported a decline in February 2019 sales, compared to February 2018.

“Incoming results point to a February sales pace that should be above the 16.6 million unit (SAAR) pace of January, but below the year ago level of 16.9 million units,” said Stephanie Brinley, principal automotive analyst at IHS Markit. “As such, IHS Markit forecasts a volume decline for the full year, and monthly declines and variability are to be expected.”