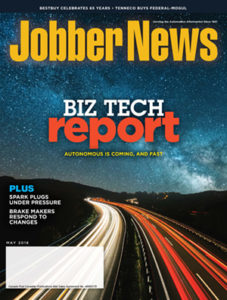 It was bound to happen. Not that you wanted it to, but sooner or later a self-driving vehicle was going to be involved in a fatal collision.

And it happened in March in Tempe, Ariz. A woman, Elaine Herzberg, was killed crossing a street at night by a self-driving Uber vehicle.

Blame and accusations have been tossed around – the woman was outside of a crosswalk, the backup driver seemed to not be paying attention at the time of the crash – but none of this will really help anyone.

Scrutiny must remain high on this technology but progression can’t be halted.

It was a tragedy. Full stop. No argument. What is important, however, is to learn from the incident as we move forward. Gary Silberg, partner at business advisory ﬁrm KPMG, told attendees of the Automotive Aftermarket Suppliers Association’s Vision Conference in Chicago just days after Herzberg’s death that he had two key questions following the collision: Could a human have saved her life? And could the vehicle have saved her life?

To the ﬁrst question, we don’t know for sure. From the grainy dashcam footage, it appears not. Herzberg appears at the last moment out of the shadows and darkness. The city’s police chief said it would have been “difﬁcult to avoid this collision.” Still, nothing conclusive says a human driver would or could have made the difference.

As for the second, it appears to be a bit muddy. The vehicle’s lidar sensor is supposed to work well at night when it is dark, detecting objects from hundreds of feet away. Even if the sensors noticed her on the sidewalk, the system can’t anticipate if a pedestrian will suddenly cross outside of a designated zone.

As a society, we need to demand transparency from the investigation following Herzberg’s death.

It’s clear that something went wrong somewhere. Unfortunately, it’s reasonable to say that this will not be the last incident of its kind.

While Uber has suspended its road tests, General Motors, Ford, Google’s Waymo and Aptiv (formerly Delphi) are just some of the other active players in this space. So the doors are not closing on autonomy, nor is progress slowing. This is amazing technology. The beneﬁts are great.

Much of the appeal of self-driving vehicles is the technology’s ability to reduce pedestrian fatalities. As Silberg told conference attendees, too many die from vehicle-related incidents where a human is behind the wheel.

“If yesterday was an average day, around 110 people died from cars,” he said. “I want to put this accident in context … but I also grieve for the 100 people here and however many hundreds more around the world.”

Car crashes happen far too regularly that involve drinking, drugs, texting and other distractions that impair human drivers behind the wheel. We are not infallible people. Autonomous technology can take these variables out of the equation.

But if the right systems are not in place, are not good enough or are otherwise questionable, then what’s the point?

Don’t turn your back on autonomous technology but make sure your questions are being answered. By all indications, we’re just a few years away from it on our roads.