GDI provides the basis for cleaner and more economical power generation. High-pressure fuel injected directly into the combustion chamber allows for a more homogeneous and lean-burning combustion. It also contributes to the current downsizing trend without sacrificing the desired horsepower.

On the downside, however, a common complaint about these vehicles is that it creates increased incidence of carbon deposits inside the cylinder head.

The cause of carbon build-up can vary by vehicle make. In fact, some engine management systems can mitigate the carbon build-up with something as simple as an ECU update. When it does occur, carbon build-up is usually due to a combination of the use of low-quality fuel, frequent cold-weather trips, and positive crank case ventilation which may leave an oily layer around the intake valve. These factors, in conjunction with the operating temperatures of the engine casing, lead to a build-up of carbon deposits.

Timing may also have an effect, if the intake valve stays open long enough to be exposed to unburned fuel.

The location of the GDI injectors in the cylinder head could also play a significant role in carbon build-up because they may not allow for the fuel sprays to reach the back of the intake valves, making it difficult to keep the intake runners and valves clean.

So what exactly is the impact of carbon build-up on drivability, performance, emissions, and fuel economy? 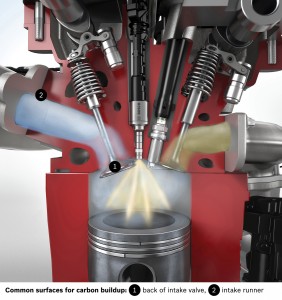 With regard to drivability, one of the more common symptoms is a lack of power, especially when driving at higher speeds. Other symptoms could include cold stalling and cold-start difficulties – including rough running when the engine is cold.

There’s also the possibility of a failed NOX emissions test or excessive ping on acceleration.

In some cases, carbon build-up will cause one or more cylinder misfire codes (P030X), which will result in fuel inefficiency and poor performance. This occurs when an insufficient number of cylinders fire while the vehicle is in operation.

If the presence of carbon deposits is not detected early enough or the build-up is severe enough, the check engine light will turn on and the vehicle is likely to fail inspection.

The problem is a progressive one. At its earliest stage, residual carbon is actually quite soft. In this state, it is sooty and more easily dissolved so it can be fairly easily remedied. Simply following the manufacturer’s preventive maintenance schedule will go a long way to keep this kind of carbon build-up to a minimum. And the use of a good fuel additive will address the problem in its earliest stages if it is added to the vehicle’s fuel system before warm-up.

The time it takes for soft carbon to harden depends on the motorist’s driving habits and the initial cause of the build-up. As it hardens, however, more aggressive measures must be used to clean engine surfaces.

Technicians may find they need to use a fogger system via the throttle body. The fogger is connected to a pressurized dispenser filled with a chemical blend formulated to dissolve carbon deposits from the valves and passageways.

Once the carbon is baked on, it becomes very hard indeed and is much more labor intensive to address. The most common procedures call for removing the intake manifold to expose the head’s ports, and rotating the engine by hand in its normal direction of rotation so that the intake valves for one of the cylinders are completely closed, then utilizing some form of media blasting.

Checking certain components when a car comes in for service will help to catch carbon build-up before it becomes an insurmountable problem.

Inspecting spark plugs is a great place to start, because it may help to reduce the amount of unburned fuel in the combustion chamber. Follow the regular maintenance schedule. Look for telltale signs of product failure, such as an illuminated check engine light, or poor vehicle performance.

Using the manufacturer’s specified oil is particularly important when it comes to prolonging GDI service life. If the wrong oil is used or the vehicle owner does not follow the manufacturer’s recommended oil change intervals, it may result in damage to the high-pressure pump or other GDI components.

Servicing and repairing GDI systems starts with education. Technicians should know the vehicle manufacturer’s maintenance schedule, designed to ensure prolonged the life of GDI system components. They should especially learn to identify system failure symptoms so they can be proactive in sharing the information with their customer when servicing these vehicles.

Learning about the tools needed to service these vehicles is also important. Those who are savvy will build on the principles they already know to simplify their approach to servicing a very complex system.

The shop also has a role to play in educating customers on the nature of the GDI system. Service advisors can guide motorists in taking the right steps to avoid build-up of carbon deposits. Explaining the manufacturer’s schedule for service is a good start. And there are a few proactive measures they can take to have their vehicle inspected between services.

GDI is a great technology and if serviced properly is nothing to be intimidated by. By understanding the problems caused by carbon build-up, and how to avoid them, repair shops can help their customers protect the investment they’ve made in a GDI-equipped vehicle.