Advancement of autonomous set to accelerate

Robots and humans will soon share the road. How can and will the two co-exist? 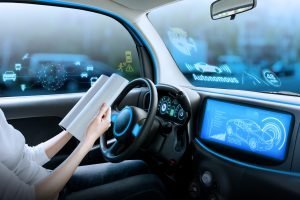 In the next ﬁve or so years, most if not all major automakers plan to have a self-driving vehicle available for customers to purchase.

But given the expected high price point combined with skepticism from the general public, drivers of today’s vehicles may not ﬁnd themselves competing for road space with automated cars right away.

As with other highly-anticipated electronics – remember how expensive DVD players were when ﬁrst introduced to the market? – as prices fall and trust builds, expect self-driving vehicles to be commonplace.

How common? IHS Markit pegs the number at 33 million units by 2040. It may sound small in the grand scheme of things but consider that the analyst ﬁrm expects just 51,000 units on the road in 2021. In 2025, one million self-driving vehicles are expected to be sold, it predicted.

The key driver will be the shared mobility ecosystem as the “mobility-as-a-service system will ﬁrst bring this technology to the masses before individual ownership of autonomous vehicles enters the picture,” IHS said in a report released earlier this year.

In fact, trust is already growing amongst consumers.

Deloitte, a professional advisory ﬁrm, asked Canadian consumers if they felt fully self-driving vehicles would be unsafe. In 2017, more than two thirds – 69 per cent –said yes. Fast-forward to 2018 and that number dropped to 44 per cent, according to the ﬁrms’ 2018 Global Automotive Consumer Study.

“However, even though the survey results suggest a positive directional trend for autonomous vehicles, it still leaves almost half of consumers in most markets doubting the safety of this technology,” Craig A. Gifﬁ, Joseph Vitale, Jr., Thomas Schiller and Ryan Robinson, automotive group leaders at Deloitte, co-wrote in the report, adding that they expect “acceptance of autonomous vehicle technology to grow more favorable with real-world positive experiences.”

Global market research company Ipsos found that Canadians and Americans are unique globally in their feelings towards the technology. A quarter of people in both countries said they were dead-set against self-driving cars, saying they opposed the technology and would never use it. In 28 other countries, that number was just 13 per cent. Only 18 per cent of Canadians are in favour, compared to 22 per cent in the U.S. and 30 per cent globally. The remainder said they were unsure.

Still, the aftermarket should be preparing for the technology because it is indeed coming.

“Autonomous mobility services can deliver newfound personal freedom to the young, old, disabled and others without reliable transportation for everyday needs but the benefits don’t have to stop there.”

The United States – where fears of automated technology fell from 73 per cent to 48 per cent, according to Deloitte –  is expected to be the ﬁrst to deploy the technology in the world as mobility service fleets are expected to ease concerns among doubtful consumers.

“Mobility-as-a-Service is a boon to autonomous driving, and it will help prove and improve the technologies while allowing the industry to reimagine the relationship between the car, the driver and the user experience,” said Jeremy Carlson, automotive analyst principal at IHS Markit.

Once people get to experience the freedom the technology allows, plus the health beneﬁts tied to better air quality thanks to electric vehicles, Carlson expects minds to change and investments to pay off.

“Autonomous mobility services can deliver newfound personal freedom to the young, old, disabled and others without reliable transportation for everyday need. But the beneﬁts don’t have to stop there,” he said. “Fleet operators in big cities who better understand the lower operational costs of battery electric vehicles are more likely to employ them to drive higher amounts of vehicle and passenger miles travelled.”

Canada, along with Japan, South Korea and Australia, is expected to see self-driving cars as early as 2022, thanks to “favourable conditions” such as regulations and the strength of the local auto industry. Other global markets, however, “are expected to experience more roadblocks that bring late initial deployment and low adoption of autonomous driving overall.”

Business advisory ﬁrm KPMG surveyed 900 executives for its annual Global Automotive Executive Survey 2018. By 2020, they ﬁgure 40 per cent of all vehicles will be personally owned vehicles. By 2030, that number will drop to 35 per cent. In 2040, 30 per cent of vehicles will fall under this category, but it will still own the largest share. Mobility-as-a-service will be in the 20-22 per cent range over that time with personally owned autonomous vehicles in a similar range at 22-24 per cent. Mobility-as-a-service won’t be much different either, owning a 21 over cent share in 2020 and growing to 24 per cent in 2040.

It still represents a changing reality.

“The survey’s results indicate that different mobility concepts will co-exist and their progression will impact business models, infrastructure and social aspects,” KPMG’s report said. “For example, autonomous mobility-as-a-service would be nothing other than a different form of public transport, which could make parts of today’s conventional public transport systems obsolete.”

One challenge that will face early adopters is how robot-operated vehicles will co-exist with human drivers. About three-quarters of the executives surveyed believe that mixing the two types of drivers will lead to severe safety issues.

“If the majority opinion of execs proves to be true … it is unlikely that fully autonomous vehicles and human drivers will use the same roads.”

As a result, KPMG recommended secured spaces as a way to keep both parties separate.

“Secured spaces for an interim time might be a solution to disconnect autonomous vehicles from the complexity of today’s car environment, making it nearly impossible to include every eventuality into an algorithm,” it said. “Starting by establishing exclusive car lanes for autonomous vehicles that are separated from the environment, those eventualities will be limited – if it works for trains why shouldn’t it work for cars?”

Of course, that’s not without its challenges. Cities around the world are not currently built to accommodate this possibility. KPMG acknowledged this, saying, “City centres would have to change completely and the challenge would then be to co-ordinate totally different systems and infrastructures to simultaneously persist and communicate in trafﬁc.”

As technological capabilities grow, so too will the reach of automated vehicles.

“The integration of technology and the driving experience is in full force as autonomous driving and collision avoidance are fast becoming the top technology focus points for original equipment manufacturers,” said Peter Hatges, KPMG Canada’s national automotive sector leader. “As these trends develop further, technology companies will continue to have a signiﬁcant impact on the driving experience and driver safety.”