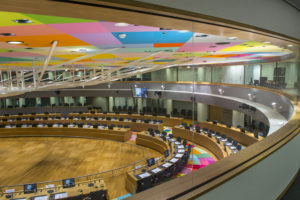 The Europa building, home of the European Council and the Council of the EU

The European Union’s antitrust watchdog said Monday that investigators have conducted inspections at a number of German automakers over cartel concerns.

The EU Commission did not say which automakers were involved, but said the inspections do not imply guilt.

Daimler said separately that investigators were on its premises.

“We can confirm that an announced inspection is taking place at Daimler,” spokeswoman Uta Vellberg said, adding that “we are co-operating fully with the authorities.”

Volkswagen and its Audi unit also confirmed receiving visits from European inspectors, German news agency dpa reported. They used the term “announced inspections” rather than searches and said they were co-operating fully with authorities.