Bill 203 described by opponents as a Seinfeldian "bill about nothing."

Proposed legislation to establish new rules for the auto repair industry in Alberta has been referred to a provincial committee for further study.

The provincial legislature decided that Bill 203 – a controversial private member’s bill described by opponents as a Seinfeldian “bill about nothing” – should be heard by the Standing Committee on Families and Communities. 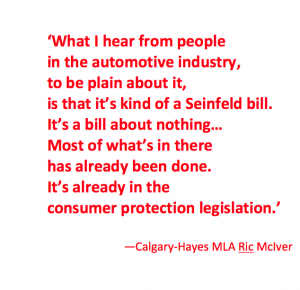 The move gives the repair industry in that province a chance to explain their opposition to provisions of the proposed legislation that they consider to be unrealistic and unfair.

According to Art Wilderman, executive director of the Calgary-based Canadian Independent Automotive Association (CIAA), Bill 203 duplicates consumer protection measures that are already in place, and puts unrealistic constraints on the automotive repair industry.

“We have significant concerns about warranty requirements,” he told CARS magazine. “We don’t believe government should be involved in warranty considerations at all. That’s part of the value proposition when you buy a product. Demanding that there be a warranty – 5000 km or 90 days – comes with a cost for one thing, and if you have a good product you can offer a better warranty and if you have a recycled or used part, you don’t often give a warranty at all. It comes down to a lack of understanding about how our industry operates.”

He said the most irritating provision of the bill was that shops would not be able to charge for estimates or the diagnostic time that went into preparing them.

The bill, a proposed amendment to the province’s Fair Trading Act, was given second reading in the Alberta legislature on April 11.

In introducing the matter, the author of the bill, Edmonton-Meadowlark MLA Jon Carson, said it was designed to “protect Albertans from undue and unanticipated costs.”

He said some automotive repair businesses are “lagging behind” in their consumer protection efforts.

“This is causing difficulty for consumers when they are choosing where to have their vehicles repaired,” he said. “I believe that consumers should never have to worry about being taken advantage of, especially when they may be in a position of financial vulnerability.”

Calgary-West MLA Mike Ellis questioned the need for the legislation, which he said clearly drew inspiration from similar laws in Ontario and Manitoba.

“Alberta is the only province in Canada with a regulatory body, the Alberta Motor Vehicle Industry Council, AMVIC, to monitor repair services by operating under designated provincial legislation,” he pointed out.

Furthermore, AMVIC received a miniscule number of complaints from consumers about automotive repairs in the past year, and none of those led to fines or actions.

He described the act’s requirements concerning estimates and diagnostic time as “very illogical.”

“Consider this, for example. A vehicle has an electrical issue and requires six hours of diagnosis time by a skilled and highly trained technician with high-tech equipment. A broken wire is found to be the problem, and 10 minutes of repair is then required. As this section of the proposed bill currently reads, a repairer could only charge for the 10-minute repair time, not the six hours of diagnosis time,” he said.

A couple of MLAs described themselves as former industry insiders. Both Brian Malkinson and Andrew Anderson said they were former mechanics.

NDP MLA Malkinson spoke in favor of the bill. Anderson, a member of the Wildrose Party referred to it as “a bill that would be more appropriately entitled the Needlessly Redundant Solution in Search of a Problem Act.”

Calgary-Hayes MLA Ric McIver, a member of the Conservative Party, said his discussion with automotive professionals have led him to believe the bill is “kind of a Seinfeld bill. It’s a bill about nothing.”

Ultimately, at the suggestion of Olds-Didsbury-Three Hills MLA Nathan Cooper, the bill was sent to committee for further consultation.

Click HERE to read the full transcript of the debate.


1 Comment » for Controversial bill sent to Alberta committee for study