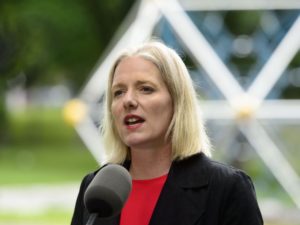 The Global Automakers of Canada (GAC) say siding with California’s vehicle emissions plan could be putting the cart before the horse.

The GAC expressed their concern over the recent announcement that Canada has signed a Memorandum of Understanding with California to pursue stringent regulatory measures to reduce greenhouse gases and air pollutants emanating from vehicles.

Environment Minister Catherine McKenna signed a vehicle-emissions agreement with California Wednesday with hopes of achieving 100% of all light-duty vehicles sold in Canada be zero-emissions by 2040.  Canada will also offer a rebate up to $5,000 for qualifying zero-emission vehicles and tax incentives to business looking to upgrade their fleets to zero-emission.

McKenna indicated that the ideal result would be for the U.S. to continue with one national standard, but acknowledged right now it looks as though there will be two – the national standard from the White House and the one followed by California and at least 13 other states that have aligned with California.

While the GAC said it is fully supportive of the need to de-carbonize transportation it is concerned that the agreement could be seen as a signal that Canada will side with California over the U.S. when it comes to emissions standards — a position that could undermine the proposed North American free-trade agreement.

“Our concern is that today’s announcement appears to be putting the cart before the horse,” said GAC president David Adams. “The situation with respect to emission standards for light duty cars and trucks through 2025 in the United States has not been settled yet, and Canada’s current regulations incorporate by reference those same standards.”

“While we appreciate that the (Canadian) federal government might wish to pursue more aggressive standards than those of the United States, we support the actions of our industry associations in the United States that have appealed to the President to continue with responsible – yet challenging – emission reduction targets that would also be acceptable to California – to preserve one national standard in the U.S. and effectively North America,” said Adams.

Mark Nantais, president of the Canadian Vehicle Manufacturers Association, believes it would be to Canada’s benefit to encourage California and the U.S. federal government to resume their talks to develop a single standard.

He said if the U.S. splits its standard and Canada picks a side, it could raise prices of vehicles or limit available car models as companies simply refuse to produce cars that meet Canada’s and California’s demands.