No one thinks solving the current labour crisis is child’s play… but there are similarities.

There must be modern games like Don’t Break the Ice and Ker-Plunk but I don’t know them. So at the risk of dating both you and me, I will have to start this essay discussing these once-popular children’s games.

The idea behind them, of course, was that repeated, seemingly insignificant modifications would eventually lead to massive and irreversible change.

We didn’t realize that’s what we were learning. We were little. But the lesson was there if you looked for it. Remove too many straws and the marbles will fall. Remove enough blocks and the ice will break.

When we grew older, we came to know this as the “trigger effect” or the “domino principle” or the “tipping point.”

Whether you’re talking about marbles or geo-political governance, it’s possible to cross an invisible threshold beyond which change is not only likely, it is inevitable.

With any luck, we’re headed for the tipping point that will bring a flood of much-needed labour into the skilled trades.

The Canadian Apprenticeship Forum (CAF) is doing what it can to remove the straws and ice that hold back the deluge. It recently wrapped up a cross-country tour designed to build on a momentum of ideas and conversation, and turn it into a working strategy to solve the problem. 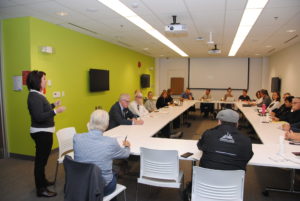 Executive director France Daviault – a former vice president of the Automotive Industries Association of Canada, and no stranger to the challenges the aftermarket faces with regard to skilled labour – spoke plainly about the tipping point she’s working toward.

“I don’t know what the catalyst will be that finally turns what we know into action,” she told participants at one of the tour’s final community consultations. “I don’t know what will break through the logjam, but it can’t come soon enough!”

Indeed, a recent CAF report estimates that at least 167,000 new apprentices will be needed in the top Red Seal trades across Canada within the next five years to meet the demands of their industries. The growing crisis has spurred much talk in break rooms, union halls, and classrooms.

Each of the community consultations hosted by CAF brought back the same talking points and questions:

* How do we improve completion rates?

* Can we remove barriers to entry, like the high cost of tooling?

* Why can’t we simplify the registration process for apprentices?

* How do we communicate the fulfillment that comes from working with one’s hands?

* Can we position the trades so they’re more attractive to young people?

“I get that we’ve all been talking about this forever,” Daviault said. “As the need becomes more dire, and as businesses start having to turn away work because of a shortage of labour, perhaps when we put our heads together, we’ll identify some tactical items that we can all benefit from,” she said.

Every small effort and each local program has the effect of removing another of the many straws that holds back the marbles. I applaud the CAF for keeping the talk going until truly unique ideas reveal themselves and a co-ordinated plan of attack emerges.

I want to hear what you think. You can reach me at allan@newcom.ca.