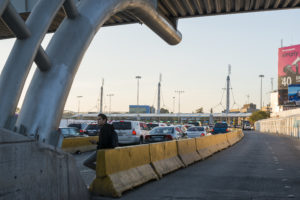 Long lines of cars on the Mexican side of the border wait to cross from Tijuana to San Ysidro, California. This is one of the busiest border crossings in the world.

Two of the automotive aftermarket’s largest groups are demanding that the United States-Mexico border stay open.

The missive follows threats from U.S. President Donald Trump that his government would shut down the border over supposed border security. Trump claimed Mexico wasn’t doing enough to stem the influx of migrants.

The effect of that decision on many industries, notably the automotive aftermarket where parts cross borders multiple times during the manufacturing process, would be far greater and cause more negative damage than the little, if any, positive work of stemming migrants, observers warned.

In a separate statement, the Motor & Equipment Manufacturers Association (MEMA) – under which the Automotive Aftermarket Suppliers Association is a member – urged the government to explore different strategies than one that affects so much business.

“The North American supply chain and continued viability of the entire industry requires an open, functioning border,” the group said. “U.S. Customs and Border Protection has already reassigned officers away from trade processing, resulting in extensive border slowdowns, disruptions to companies’ supply chains and overall confusion at the border.”

The United States imports more than $55 billion in auto parts and ships $30 billion to Mexico. Hanvey noted that Trump has made American manufacturing jobs a focus of his presidency and this move would put those jobs in jeopardy.

“Even a temporary halt to this critical flow of trade between countries will have an impact on both the domestic auto care industry, which employs 4.6 million people nationwide, and on the safe operation of the 280.6 million cars and trucks on the road today,” he said.

“If the border is closed, the inability to deliver goods will impact U.S. automotive production immediately,” MEMA’s statement said. “Similar impacts will be felt by all companies engaged in cross-border trade, across all industries, which will have a significant impact on businesses and consumers throughout the entire U.S. economy.”