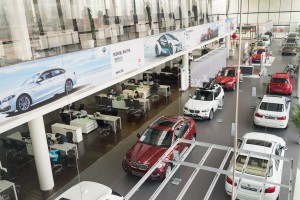 It’s a move that officials hope will boost car retailer competitiveness as the country’s economy slows.

According to draft rules posted by the Ministry of Commerce for comment on its website, auto manufacturers would no longer be allowed to forbid their dealers from selling cars from rival brands. They would instead have to tell their customers if they haven’t obtained permission from manufacturers to sell a certain brand of cars.

Reuters reports that the Chinese economy continues to falter, with a private survey showing on Monday that factory activity shrank for a 10th straight month in December.

The draft rules would protect dealers from being dumped by manufacturers, who would be required to authorize dealers for at least five years at first and for three-year periods thereafter.

Manufacturers also wouldn’t be able to set fixed sales quotas or limits on dealer inventory, unless both sides agree in the authorization agreement. Dealers can also sell cars and parts to each other.

China’s auto market is expected to have grown 3 percent in 2015, with the chief of China’s automakers association forecasting 5-7 percent growth for 2016.