Castrol, a division of BP, has achieved a breakthrough in engine-lubrication design that makes it easy to change a vehicle’s engine oil in as little as 90 seconds.

The brainchild of a product development team comprising of technologists in the UK, U.S. and Germany, the said modification could also help lower carbon emissions and fosters recycling. 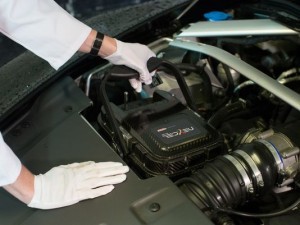 The new system, which Castrol has dubbed Nexcel, must be integrated into vehicle engines at the design stage. That means it likely won’t hit mainstream cars for another five years – about the length of time between major model changes for many automakers.

The lubricant expert is already in discussions with several major automakers to speed adoption of the Nexcel system, which it claims is significantly faster than the traditional 20 minutes it takes to get an oil change.

“It’s a revolutionary technology that’s the most significant change in oil servicing since the introduction of the vehicle,” said Steve Goodier, project leader. “The average driver will not notice a direct difference as far as driving it down the road is concerned. Where the driver will see a benefit  – and it’s quite significant – is time.”

Though most of the technology’s know-how and pricing is still under wraps, Castrol disclosed that Nexcel comes loaded with several environmental benefits. It lowers carbon emissions when the car is driving and enables improved recycling of oil cells back into refined petroleum. “It means you do not waste a drop of lubricant during the oil-change process,” Goodier said.

A key test is whether the oil delivers smooth handling, braking and accelerating. Castrol said the technology “functioned smoothly” in a test in which a vehicle went from 62 miles per hour to a full stop in 1.6 seconds. The system has also been tested with everything from cheap minicars to racecars.

The system will make its debut in the Aston Martin Vulcan supercar, which can only be driven on racetracks, not streets. Castrol said that the decision was made to speed the process of development and testing, allowing other automakers to gauge performance before adopting the system.