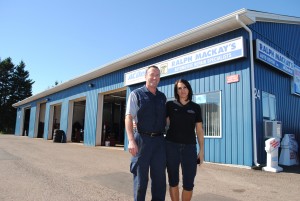 Ralph Mackay and his wife Tina have built a solid business with a great reputation in Riverview, New Brunswick.

Ralph Mackay has found that educating customers has the double benefit of building loyalty and addressing the most common misconceptions people have about auto repair.

The owner of Ralph Mackay’s Auto Repair in Riverview, New Brunswick has built a thriving business by focusing on communicating the information his customers need to make good decisions about their cars.

“Educating people is so important,” he says. “A lot of times I’ll take them right out into the shop. They might say, ‘No, no, I trust you.’ But it’s easier to show them if something is leaking, or worn, or bent, than try to explain it at the counter.”

After 20 years in business, he’s come to see the power of being open with his customers, inviting them to ask questions, and making sure they understand the recommendations that are being made. This is particularly important in a province where annual safety inspections are mandatory and consumers may view repair shops as opportunistic.

He and his service writer, Chris McGrady, have built education into their daily processes.

“Chris is really good at telling customers how their vehicles work and why it’s important to maintain them,” says Ralph.

Sometimes the education is all about the parts themselves.

“People sometimes want to bring in their own parts. I’ll let them if they insist, but there’s no warranty with those parts, and if they fail it’s not on me,” he says. “But often they realize that’s not the way to go if you spend the time to educate them.”

For example, he recently had a customer who needed brakes all round. She had a coupon book that offered her 50% off brake pads at a particular parts store.

“I said, ‘OK, but be aware of what you’re buying.’ I told her there are various grades of brakes, and the part store she had a coupon for is known for pushing cheap stuff. I talked to her about the various options – ceramic and metallic – and she needed to get the kind that was best for her vehicle. I explained it all out to her, and I gave her a quote of what I’d charge for the job, using quality parts and offering a good warranty.”

He won the job… and the parts sale too.

“We just try to treat everybody honestly and fairly,” he says. “And education is part of that.” 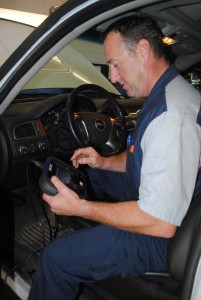 Ralph Mackay still gets his hands dirty. He’s an owner that hasn’t left the bay yet… not because he can’t but because he loves the work and he’s got a great service writer to run the front of the shop.

As for Mackay himself, you’ll most often find him in the back, working with the other techs in the shop’s six bays. He tackles some of the more complicated electrical jobs… not because he has to but because he loves it.

“I know everyone says don’t do that. They say the owner shouldn’t be in the bay. But I have a really good guy up front, and I just enjoy it.”

In fact, growing up in Murray Corner, New Brunswick, just north of Port Elgin, he always wanted to work with his hands.

“I was always tearing stuff apart when I was a kid. I always wanted to be a mechanic, always interested in cars,” he says. “I took automotive in high school, and all through high school I pumped gas, and changed tires, and oil, and stuff like that.”

When he graduated, he drove all the way to Moncton to apply for a job at a garage run by Bill Sneath.

“When I didn’t hear from him right away, I drove all the way back a day or two later to make sure he understood I really wanted the job!” he laughs. “Well, he hired me and put me on my apprenticeship.”

Mackay worked there for a few years and then went to another shop to finish off his license. The third place he worked at is where he ended up staying. Ultimately he bought the business.

“I didn’t buy the name. Just bought his inventory and some good will, I guess, but I put my name on the business. I still have the small little sign in my garage at home,” he says. “I remember I had to scrounge the money together to have this sign made. Oh, it was beautiful!”

To his credit, the business never really struggled. With his wife Tina working the front counter, he and a full-time tech turning wrenches in the back, they built a reputation for quality work and friendly service.

He was a new father at the time, working 14-hour days, six days a week.

“It got tiresome after a while. I did that for probably nine or 10 years. But I never worried about the money. I always paid my bills.”

Mackay says he went to market the same way back then as he does now.

“We use good quality parts, treat people fairly, and do the job properly. It’s basic stuff, but it works.”

The annual inspection brings in a regular stream of traffic, but at $35 a pop (the price was recently raised from $25), it’s still a loss leader.

“You’re not making any money on it,” he says. “On a relatively new car the inspection might take half an hour. But on an old car, with all the corrosion, you can be an hour because you have to take wheels off to look at the brakes.”

The trickiest part of the business these days is making sure he has enough technicians.

“It would be nice to have an additional person, but even apprentices are hard to find,” he says. “And growing your own technicians is tough. I’m coming to the conclusion that if you have to spend so much time training that it would be easier to just do it yourself, you might be better off to hire a licensed technician. If you can find one!”

Something he won’t do is poach from another shop. (“If they come to me looking for a change, that’s another story!”)

He and Tina have a son and a daughter but he’s not looking at them to take over the business when he retires. They’ve got other plans. So he’s hoping to find someone who’s interested in taking over the business, running it the way he wants it to be run during a transition period.

Lesson number one would be don’t be afraid of a little hard work.

“We’ve always worked pretty hard around here,” he says. “We all put in a good day’s work.”

If his protégé is anything like him, they’ll find great fulfillment in offering good work at a fair price.