VIEWPOINT: From the Flintstones to F1 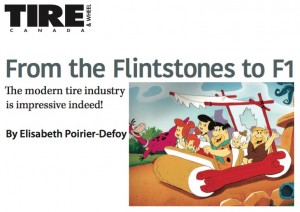 Remember the Flintstones’ car? It ran on gigantic rock cylinders that seemed to be able to negotiate just about any terrain. It’s how someone envisioned the earliest stone-age wheels.

Thankfully we don’t have to align, balance, repair, and store granite wheels! Instead, we have a wide range of modern tires that have evolved from the most basic wooden designs to highly engineered natural and synthetic rubbers that provide optimum performance under the most grueling conditions.

In 1830, the Frenchman Charles Dietz first envisioned using a sleeve of some sort to cushion a vehicle’s ride. But the world would have to wait until 1850 when self-educated chemist Charles Goodyear invented the process of vulcanization, which allowed for the manufacture of stable rubber products for a wide variety of uses – including encircling wheel rims. The true inventor of modern tires, would never know that a global tire company would one day bear his name.

The Scottish veterinarian John Boyd Dunlop was the first to add air to the equation, creating a ‘pneumatic’ tire for his son’s tricycle in 1887.

And when, in 1889, the Michelin brothers, Édouard and André, created a removable inner-tube that could be repaired in the event of a puncture, everything was finally in place for the modern tire industry. 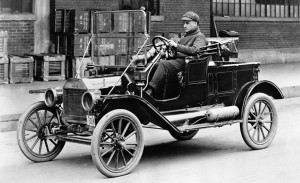 By the early 1900s, Harvey Firestone, founder of the Firestone Tire and Rubber Company, was making millions of tires for the Model T automobile, the invention of his friend Henry Ford. Firestone was the world’s leader in tire production.

The Goodyear company gave Firestone a run for its money in the 1930s, however, when its biggest customer, General Motors, began to challenge Ford in North American sales.

All the while, tires were continuing to evolve, using different rubber formulations and designs to meet different application needs and demands.

Radial tires, which used cord plies to increase strength and longevity, became the standard. And in 1934, a small Finnish manufacturer, Nokia, invented the first snow tire.

Eventually Michelin overtook Goodyear as production leader when it acquired the BFGoodrich and Uniroyal companies. Goodyear, Michelin and Pirelli would spearhead much of the development in this industry. By the end of the 20th Century, Bridgestone was the world leader, having acquired Firestone in 1988 to dominate production rankings.

Today there are over 450 tire companies around the world – a quarter of them in China. Canada has a strong tire industry, with Michelin, Goodyear, and Bridgestone-Firestone producing millions of tires for domestic and international use.

What keeps the industry vibrant, is the constant development in laboratories around the world. Chemists and engineers are pushing the capabilities of modern tires to capture greater market share.

Each new tire that is introduced into the market represents a long process of research and testing, often lasting four or five years. 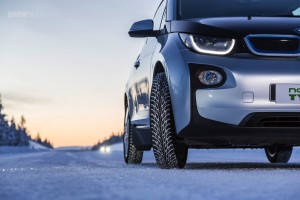 Tread design has become high science, and is sold as the unique characteristic of each model. Each rib or groove in the sculpture reacts differently to road conditions, whether dry, wet, icy, or snowy. Engineers and designers are addressing new issues daily, spending the hundreds of millions of research and development dollars that the various companies are willing to invest in tomorrow’s product.

Conventional treads have given way to directional and asymmetric patterns designed to tackle unique situations, including greater road adhesion, improved water drainage, and better rolling resistance. Engineers have learned how to offer the best performance under a wide variety of operating conditions, to everyone from Sunday drivers, to soccer moms, to family vacationers, to high-performance racers.