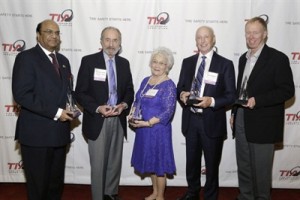 The Tire Industry Association (TIA) has announced  the 2016 Hall of Fame recipients.

The event, sponsored by Michelin North America, is open to all and complimentary tickets may be reserved at www.tireindustry.org/global-tire-expo.

Dan Brown recently retired as executive vice president and president Tire Pros at American Tire Distributors, Inc. In his 41 years with the company, he held many managerial positions and key leadership roles that helped ATD grow from a small, regional supplier, to what is now the largest independent wholesale distribution footprint in the United States.

Brown started his career in 1975 when he joined Heafner Tire upon graduation from college. He worked his way up from route salesman through various marketing roles and in 1990, Brown became director of marketing and sales. He also served important roles following Heafner acquisitions, including president of CPW and Winston Tire Company. Brown assumed the role of ATD’s senior vice president of sales & marketing in 1997 and remained in that position until 2001.

Richard “Dick” Gust has nearly 40 years’ experience in the tire and rubber industry. With a degree in chemistry from the University of Wisconsin Eau Claire, he began his career as a tire design engineer for Uniroyal and eventually moved into managerial positions. He then joined Sears as a product manager.

Gust has devoted considerable time pursuing solutions to the nation’s scrap tire problem. When scrap tire piles became an environmental concern, he expanded scrap tire collections and began serving the collection and recycling needs of major accounts in all 50 states.

He is recognized as an authority on scrap tire environmental issues and is frequently called upon by state regulators to assist in drafting rules and regulations for managing the flow of scrap tires. Gust worked with companies to develop tire derived fuel and the use of tire derived rubber as mulch and equestrian material.

Fred Kovac, the late vice president of Tire Technology for The Goodyear Tire & Rubber Company, was a man of vision who mastered the art of understanding the needs of customers and innovative tire design to create highly successfully Goodyear tires and leading the entire industry in completely new directions.

Kovac worked at Goodyear from 1956 to 1995 and was responsible for a number of significant tire successes including the belted-bias tire construction process and an all-season tire. In the early 1980s, Goodyear engineers worked with the concept of twin tires to improve hydroplaning resistance. However, the concept was not commercialized. Kovac wondered if such hydroplaning attributes could be combined in one tire and the result was Goodyear’s Aquatred.

In 1978, Kovac transformed an old Akron tire plant into Goodyear’s world-class Technical Center, which continues to operate today as one of Goodyear’s key global innovation centers.

Kovac earned degrees in law and rubber chemistry from The University of Akron and held 13 patents dealing primarily with fabric reinforcement of tires. During his 39 year career, he made numerous, significant advances in technology and financial contributions to Goodyear while leading the industry in new directions that continue to benefit it to this day. Kovac passed away in 1996.

Charles “Husky” Sherkin began his career in the tire industry at 15 years old working for his brother’s tire company, United Tire. Business started to progress and he joined as part owner. Mining was booming in northern Ontario and Sherkin saw a need for improved tires and invented the concept and developed underground mining tires and forestry tires. United established a retread plant in Toronto in the 1950’s and was Canada’s largest retreader of OTR tires.

In 1958, United became the exclusive Canadian distributor for Bridgestone, an arrangement they had for 13 years. In the 1960’s and 70’s, Sherkin created private brand OTR production with BF Goodrich, MDG and General Tire. While these private brand programs may seem not all that important in today’s world, they were pioneering at the time.

In 1972, he established an independently owned Canadian tire manufacturing plant and in 1985, that factory migrated to China and was one of the first Chinese-Canadian joint ventures signed that year. In 1995, United Tire merged its OTR business with Denman Tire. Sherkin stayed on for a few years before retiring in 2000.

Sherkin was one of the pioneers in the tire business not only in Canada but globally. He was tremendously creative and entrepreneurial in building United Tire from a small used tire trader in Toronto in 1944 to a well-respected global player in OTR tires at the time of his retirement. He was inducted into the Ontario Tire Dealers Association Hall of Fame in 2010. Sherkin passed away in 2011.