The price of safety 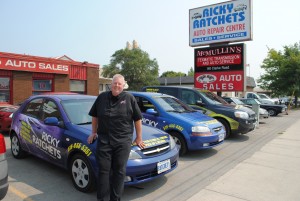 McMullin has become a proponent of mandatory annual inspections.

Rick McMullan digs through a pile of work orders, pulling example after example of safety related work that has, for whatever reason, been declined by the owner of the vehicle.

“It should never come to this,” says the owner of Ricky Ratchets Auto Repair in London, Ont. holding up one particularly offensive inspection report. “These people are meandering through traffic, on streets that bicyclists are driving on, that kids are on.”

If he was ever tempted to turn a blind eye to unperformed maintenance, he resisted it. So determined is he to help clean up Canadian roads that he spends much of his day educating his customers about the importance of vehicle maintenance. He has written and spoken about the problem in the local media. And he’s even started up a website – www.unsafecars.net – to publicize the blight of neglected vehicles on public roads.

It all comes at a cost. Some newcomers to his shop object to the “laundry list” of problems his technicians uncover, especially when other shops didn’t find nearly as much work.

“We’re known for doing thorough inspections and documenting problems. I guarantee we’ve lost business over it,” he says. “Some people just don’t want to hear the list. They’re the ones who don’t come back, or who delay their visits until the car gets really bad.

But there are wins too, like when customers admit to him, as they sometimes do, that they’re glad they had their car fixed.

For Rick McMullin, removing unsafe cars from public roads is part of the reason he’s in business.

He just got a dangerous Sunfire off the road.

But his biggest frustration is that there’s no compelling reason other than finances for people to finally unload a stinker of a car. 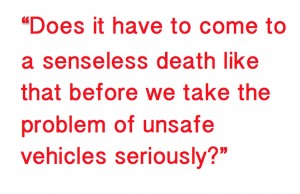 The last time he’d seen the Sunfire was about 14 months ago when it came in for a battery. The owner didn’t like the laundry list of suggested repairs he’d come up with so she went elsewhere for oil changes and tires. McMullin wishes every shop was as vigilant about pointing out dangerous vehicles.

Like many in the industry, McMullin has become a proponent of mandatory annual inspections.

“Here’s my reasoning,” he says. “People who are a year away from an emissions test will take care of things that might cause their car to fail. If we had a safety inspection, people will be more aware of what would cause their vehicle to fail, and they’d be more inclined to address it.”

He says there needs to be a real threat that their vehicle – the one they rely on every day to get them to work and school and the soccer field – will be taken off the road if it fails.

“And none of that ‘conditional pass’ stuff, either,” he says. “It doesn’t make sense to me to just do some of the work, not all of it, because it’s too expensive. Yes, it’s going to cost money. That’s the price of safety.”

He’s aware that annual inspections might have the unfortunate effect of making ‘lick and stick’ inspections more common. He knows they happen. He’s seen it. He even bought a safety certificate for his own vehicle – at a sub shop late at night. All he needed to provide was the VIN and the mileage reading. They never even saw the car. 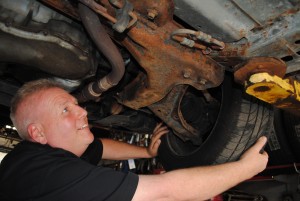 Rick McMullin, checking out the Sunfire that came in on a hook recently. Some people just don’t want to hear the laundry list of problems their cars have.

He even showed the bogus certificate to some provincial inspection officers. They said they were aware of the problem, and promised that the province has plans to do something about it.

It may stem from the lower ball joint that dropped out of the Ford Taurus he was driving as he was about to get on the highway. Or that door that came open on an old MG when he was a kid. He knows bad stuff can happen.

“When a child walks down the street, he shouldn’t be in danger of being hit by a car that has lost its steering. Does it have to come to a senseless death like that before we take the problem of unsafe vehicles seriously?”

He says he’ll continue to campaign for annual inspections as the best way to make a much-needed change.

“I’ve seen a lot of broken cars and, I’ll tell you, the E-test taught me something,” he says. “It showed that if you make people aware that there’s an inspection coming and it has real consequences, they’ll do the right thing.”


3 Comments » for The price of safety