The future of our trade 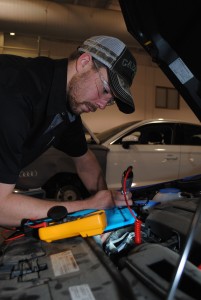 Organizers of the annual SkillsCanada competition say there’s still more work to be done to convince parents and teachers to steer young people into skilled trades.

Their annual celebration of trades is designed to present an alternative to white-collar careers.

And while they insist it has done much to increase the profile of blue-collar jobs over the years, the message still hasn’t been fully embraced by the Canadian education system.

“I think we’re moving the needle, but we’re moving it a little slower than we’d like,” says Shaun Thorson, CEO of SkillsCanada. “There are still a lot of gaps in understanding the work that is done by skilled-trade professionals.”

Thorson said the four-day national competition last month was a chance to show young people the dedication to excellence, the pride of workmanship, and the career opportunities that come with skilled trades.

Thousands of high school students streamed into the Prairieland Park in Saskatoon, Sask., to learn about a wide variety of specialized trades, and watch the cream of this year’s crop compete in 44 different skills competitions. 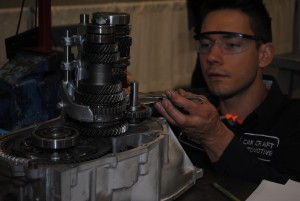 Ethan Delichte of British Columbia works at the transmission/driveline station at this year’s SkillsCanada national competition. He placed third among the post-secondary competitors.

Martin Restoule, chairman of the auto service competition and coordinator of the transportation department at Algonquin College in Ontario, says SkillsCanada offers young people a unique look behind the scenes at some very fulfilling career options.

“SkillsCanada tends to generate a lot of interest. I see it as a real positive influence on young people,” he says. “They’re looking around and saying, ‘I didn’t know that was a trade,’ or, ‘That looks like fun. I might enjoy that.’ They’re seeing first hand what their guidance counselors should be telling them about.”

He said it’s unfortunate that so few teachers see skilled trades as a viable option for bright students, rather than a repository for trouble kids. 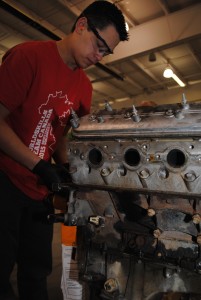 Brandon Liang of Camrose, Alta., completed the task at each testing station – but not in competition with the other students. As the winner of last year’s national skills competition, he’ll represent Canada in the automotive service category at the World Skills Competition in Brazil this summer. This was his last chance to practice before heading to that event.

“We’ve been trying to change that, but I don’t see it changing just yet,” he says. “I still get calls from teachers saying ‘I’ve got little Billy here who has some issues and we thought he’d be great for the trade.’ No, he probably wouldn’t be!”

With that in mind, organizers hosted an educators’ forum at this year’s event, offering teachers and guidance counselors insights into the kind of tools that will help give students direction and momentum in their careers.

“Both students and teachers have to understand how apprenticeships work,” he said.

Also new this year was a greater emphasis on the essential skills that make aspiring professionals more attractive to employers.

“We’ve seen young people acquiring a lot of different skills, but not always the exact ones that employers are looking for,” says Thorson. “What is sometimes missing is the right communications skills, or numeracy, or literacy skills, or some of the other elements that are also important for that occupation.”

He said that “skills mismatch” led SkillsCanada to define the essential skills emphasis at this year’s competition.

Restoule sees that as just one of the challenges of building tomorrow’s workforce. 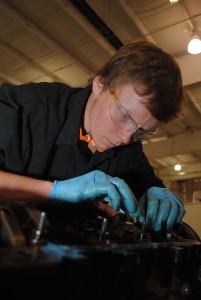 “I was a shop foreman and service manager before I went into education, and we liked to grow our own technicians,” he says. “It’s better than bringing in a technician who’s been somewhere else and comes with lots of bad habits.”

He admits it can be difficult to find the right apprentice, and shops might lose a few before they find the right one, but it’s a small price to pay.

There’s a new crop of prospective technicians being groomed at high schools and colleges across the country, he says.

The post-secondary winner of this year’s automotive service competition was Matthew Leclair, an apprentice at Hemphill GM in Summerside, P.E.I. That’s him on the cover of this month’s magazine.

The 23-year-old, who says his grandfather inspired him to pursue a career as an automotive technician, is a proponent of block release programs as a way to entice more young people into the automotive repair field.

Second place went to Seaton Crawford, a second-year apprentice at Cella General Repairs in Bolton, Ont., who describes the trade as “a hobby that I’m turning into a career.”

Allan Janssen is the editor of CARS magazine. You can reach him at 416-614-5814 or allan@carsmagazine.ca