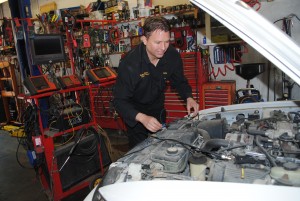 Kevin Suttorp, owner of Elec-Tech in Winnipeg, does an in-cylinder running compression test (pressure transducer test) on a 2002 Ford Mustang.

Kevin Suttorp, owner of Elec-Tech Automotive Repair in Winnipeg, doesn’t have a lot of room in his south-end shop.

It used to be a fast-lube shop, complete with oil pit and drive-through design. With just two bays, it can barely hold all the equipment he needs to effect modern repairs.

That’s OK, though, because more and more of the work he does takes place outside of the shop.

He has launched a mobile service which is popular among Winnipeg shops that don’t have the training, time, staff, or equipment to handle late-model reprogramming.

That’s what he excels at, and why he put the word “tech” in the shop’s name.

He’s been investing in tools since he started the business nearly 15 years ago. And as technology continues to advance at breakneck speeds, his equipment and his growing knowledge of automotive diagnostics have made him the go-to guy for shops facing a difficult job.

“We get so many calls from other shops. Whether it’s to replace a PCM, or tackle a security-related issue, or program a module, they don’t want to take it to the dealer, so I help them out,” he says.

He has found that independent shops don’t want to take anything to dealerships, which they consider to be a direct competitor with the built-in advantage of only having to work on one type of vehicle. 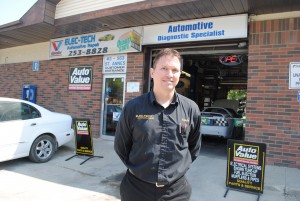 Even though the mobile work is plentiful and profitable, he finds that he still needs a bricks-and-mortar site.

“You need a home base. It’s a necessity, particularly when the vehicle refuses to get repaired,” he explains. “When you’ve programmed it and it still won’t start – maybe it’s got a network code or a short-to-ground code – you can say, ‘Look, let’s just bring it to my shop. I’ll look at it there, where all my equipment is.’”

All of his equipment? That’s quite an inventory! He can’t even put a dollar value on it. Kevin owns more electronic tools than most shops four times the size of his.

In addition to a wide assortment of factory and aftermarket tools, he has nine different high-end laptops with multiple hard-drives that he can slide in and out.

Being so dependent on his tools, he’s made sure that his shop is properly insured and he’s got alarms in place. He’s also invested in cameras that allow him to monitor his shop remotely. In fact, when he was on vacation in India, recently, he helped diagnose a vehicle from his hotel room, and even ordered a pizza for his technician, partly for the joy of watching it arrive.

As critical as the tools are, however, they’d be useless without training.

“If you don’t keep up with your training, you get behind the eight ball real fast,” says Kevin. “In this day and age, you need all the information you can get.”

That’s why, after he’s put his kids to bed, he’ll often spend a few hours researching automotive technology at sites like iATN, scouring the forums to deepen his knowledge.

He’s so committed to training, in fact, that he asked to be included in a meeting of the North American Council of Automotive Teachers when they were in town in 2011. Even though he’s not a trainer, he was allowed to participate as an “associate” member.

“It was fantastic sitting in on the courses and learning so much in a single week!” he says. “Training is one thing that’s a necessity in this industry.

He’s brought his passion for training to Auto Value where he sits as a member of its Certified Service Council. He recently did a presentation on scan tools that was an eye-opener for a lot of shop owners, and he has helped bring in high-level trainers. 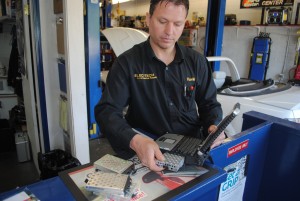 Kevin has nine laptops, including a Toughbook CF19 with multiple hard drives that slide in and out.

For his own customers, the door rate is $100 an hour. There’s no official diagnostic rate. He’ll quote the job based on the description of the problem.

“If they’re describing two things that aren’t related, you know it’s going to be tricky to find the source of the problem,” he explains. “The diagnostic rate is then calculated, the customer is informed, and a decision is made whether to proceed or not. I charge what I think is fair. It’s not uncommon to see vehicles that have been to other repair facilities with no solution to the problem.”

Similarly, charging other shops depends on a number of factors, including what’s being done, what kind of equipment it involves, and how far he’s had to travel. The demand for his services from other shops tells him that a lot of technicians are still a little intimidated by high-end diagnostics.

“Between lack of knowledge and lack of equipment, there are plenty of shops that need the services of a mobile tech,” he says. “You visit some shops and you have to wonder how they’re even staying open!”

Some shops don’t even have a proper Internet connection, something he says is critical to modern automotive repair work.

“Shops need to understand that high-speed Internet is a business requirement these days,” he says.

Because he can’t always count on a connection where he’s going, he brings his own Internet hub with him on every call. It’s a wireless router with LT connection speeds that can connect up to 10 computers. Without that, much of his equipment would be useless on a mobile job.

For a while he had ambitions to find a bigger facility so he could grow the shop… but that goes away when he considers the freedom that his current situation offers.

“I’m content where I’m at. I enjoy the mobile stuff. With this size of my shop, I can spend time on the road and still manage to take care of things here. If I had a bigger shop, I wouldn’t be able to do as much mobile stuff, because I wouldn’t be able to leave the shop unsupervised for long periods of time. It would be tougher. I’d have to hire more guys, and hire someone to run the business too, or be out front. I want to be sure that I’m involved in all aspects related to my business so I can ensure the quality of workmanship at all times.”

So for now, he’s very happy in the niche he’s carved out for himself in the auto repair world.

“I’m a firm believer that in order for work not to be a four-letter word, you have to enjoy what you do,” Kevin says. “The automotive industry is my passion and I enjoy helping others.”