As a result, many have bumped up the price for the inspection, which is mandatory on any vehicle that changes ownership or fitness status.

The long-anticipated update to the 40-year-old standard was introduced in the spring, and explained in a series of information sessions held in dozens of Ontario communities in recent months.

It came into effect July 1.

And while the details of the updated standard may still be a bit fuzzy to some shop owners, most agree everything will become clearer with practice.

Carlo Sabucco of Sil’s Auto in Mississauga said his technicians have been using the new protocol for a couple of months now, trying to get used to it and become more efficient at doing it.

“It averages about 20 minutes longer than the old inspection,” he said. “The total time probably averages an hour and 10 minutes, but it ranges from under an hour for a relatively new vehicle that’s pretty clean, to an hour and a half for an older vehicle with lots of problems.”

That’s exactly what Rick McMullin of Ricky Ratchets Auto Repair in London has found. His technicians are also spending an extra 20 minutes on each vehicle. In addition, however, there’s also the new administrative burden of typing up the findings and preparing a retail copy of the report for the customer. 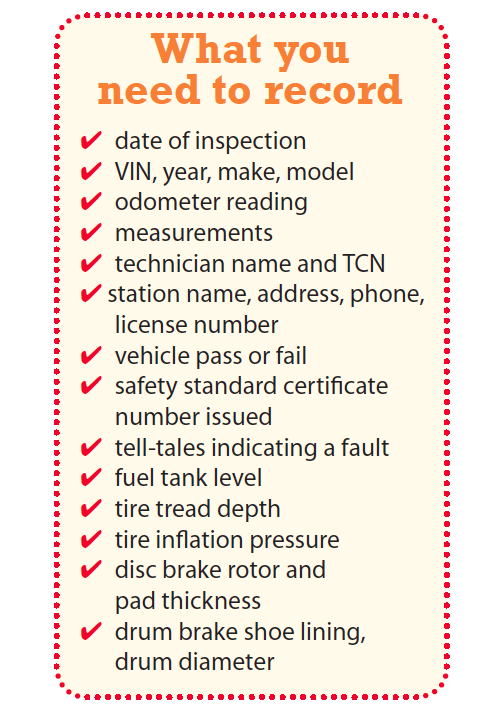 “The technician is busy enough and his hands are dirty, so that falls to us in the office.”

He said the requirement to measure component wear so closely may lead to new approaches when it comes to obvious fails.

“If you get a really rough car, and a number of things are failing, we might call it off even before it’s done,” he said. “When we see a vehicle that needs more repairs than the car is worth, we’ll call the customer and let them know. They may choose to call it off, in which case we’d just charge them for what we call a hoist check.”

Ed Jagt, owner of Pro-Tech Tire and Auto in Barrie, says that while measuring components adds to the time it takes to do the inspection, it also makes the results more useful to consumers.

“I like the fact that now the customer actually sees something in print. It’s much more accurate and consistent,” he said. “It’s no longer by the eye. You have to look up the specs and actually do the measurement.”

He embraces the new standard, but knows some shops will shrug it off and insist on doing the inspections the old way.

“They’re taking a chance, though,” he said. “If someone complains, an enforcement office will come out and do an inspection of the facility – part of which is to look at the paperwork. If they don’t have the paperwork, they’re probably looking at a fine.”

There’s no doubt some people disagree with the changes, or have problems with some of the new requirements.

Jagt points out that a windshield passes more easily now than it did under the old standard, and McMullin suspects a lot of shops are simply not ready for the system, or won’t bother changing their inspection process.

“The ‘falsie’ inspections will still exist and the mediocre cars will still make it onto the road.”

Despite extensive industry consultation, Sabucco believes there still seems to be some areas of confusion on the finer points of the standard. He’s already seen it with vehicles that have integral parking brake shoes nestled inside the center ‘hat.’ The standard calls for a visual inspection as well as a performance test. But for some vehicles, that requires pulling the caliper and rotor.

“Even the ministry people have different answers on some of these questions. One told me a performance test in a parking lot would be sufficient. Another said if you can’t visually inspect the system without disassembly, you have to take it apart,” he explained.

His solution has been to charge the owners of vehicles like that an additional fee for the additional work.

“We had one exactly like that yesterday,” he said. “It passed the performance test but we told the customer we had to pull the hat off and look at it. Lo and behold, the shoes were missing completely from one side of the vehicle. It was working on the other side enough to hold it in the parking lot.”

Diane Freeman, executive director of the Automotive Aftermarket Retailers of Ontario (AARO), believes some of the standard’s fuzzier details will get cleared up as people get used to it.

“There will continue to be a learning curve, but I think the majority of facilities were ready to go on Day 1 and are not having any trouble with it,” she said.

She points out that there was certainly an appetite for information in the final months before implementation. More than 15,000 shop owners, service advisors, and technicians showed up at the association’s information nights, held in communities across the province in April, May, and June.

Bob Lickers, a licensed technician and enforcement officer with Ontario’s Ministry of Transportation, criss-crossed the province to lead the information sessions, offering a detailed analysis of the changes and fielding questions from the thousands of facility managers and technicians who showed up.

“There’s no secret about it,” he said at a meeting that was recorded and posted on the AARO website (see it here). “Regulation 611, Schedule 1 and 2 was an antiquated piece of legislation. It was time for something to bridge that gap to deal with technology that has advanced.”

One of the biggest changes is that a road test is now mandatory. The vehicle must reach a speed of 40 km-h, and the test must include at least one full-right and one full-left turn, at least one heavy brake application, and going over a bump of at least 5 cm. The test need not be conducted on a roadway. It could be done in a parking lot (if you can reach the required 40 km-h safely). Any tell-tale indicators of a potential problem must be recorded.

The government has warned it will be sensitive to public complaints about unreasonably inflated inspections.

Rhonda Lindsay, manager of the business innovation team at the ministry’s Carrier Safety and Enforcement Branch, has gone on record as saying it was important to have the aftermarket’s buy-in on the changes.

“The last thing we wanted was a new standard that made sense to government but made no sense to people on the floor,” she said at an information meeting in Burlington late last year.

Approximately 33,000 technicians at more than 12,000 stations across the province are qualified to do the inspection. The new rules can be viewed online at www.Ontario.ca/mvis.

The approach to vehicle inspections varies across Canada.

British Columbia, Alberta, Saskatchewan, and Quebec only require inspections on vehicles being brought in from other provinces.