A couple of Canadian inventors have devised a solution for keeping a vehicle hood from falling when its gas-charged shocks no longer work. Their simple aluminum hood clamp works better than jerry-rigged solutions – like vice grips or broom handles. 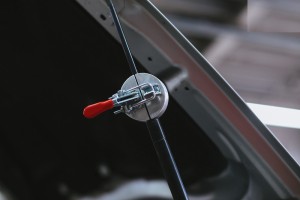 You’re working under the hood of a vehicle when the gas-charged struts give way and the hood comes down on your head. Sound familiar?

The son of a Canadian shop owner has applied his engineering expertise to make sure this never happens to you again.

Shiva Bhardwaj is co-founder of ShockLock, a new clamp designed to help keep technicians safe while working under hoods and trunks.

The electrical engineering student at the University of Waterloo says he personally witnessed the potential danger of aging hood shocks at his father’s Toronto-based automotive shop. Working part-time to assist technicians, he saw some close calls.

“I remember one incident where a customer dropped off his Mercedes B200 and he had to get something from the trunk of the vehicle,” Bhardwaj says. “It turned out the gas struts were weak and as he leaned into the trunk to get what he needed, he bumped the vehicle and the trunk hatch came suddenly down and nearly struck him hard. Luckily I was there to catch it before it came down onto him or he certainly would have been badly injured.” 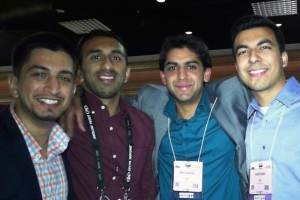 His business partner, Yashin Shah, says there are an estimated 134 million vehicles on North American roads with worn or failing gas-charged struts. Technicians see this problem in about a third of the vehicles they work on.

Jerry-rigged solutions to keep a hood up – such as using vice grips or broom handles – can be awkward or difficult to set up and often failed to keep technicians safe, they say.

The solution Bhardwaj developed is ShockLock – a simple aluminum hood clamp that grips the weakened gas strut of a hood and locks it in place. It can support up to 100 pounds of weight.

Want to see it in action? Check out the video at www.shocklock.ca.

Shah was brought in on the project to help generate interest and raise financial support. Working through the details, they were convinced that ShockLock meets a serious need in the market.

“We strongly believed that we had a viable product and business plan,” says Shah.

Tool manufacturers, distributors, and technicians were intrigued by the deceptively simple device that promises to keep technicians out of hospital emergency rooms.

Now ShockLock is ready for the aftermarket. The product is currently available through the ShockLock website (www.shocklock.ca), as well as distributors like Nortool.