‘These guys are the best. They’re really interested in what they do, they have the passion, they learn on their own, and they constantly want to know more,’ says Craig McQueen, Mazda Canada technical trainer. 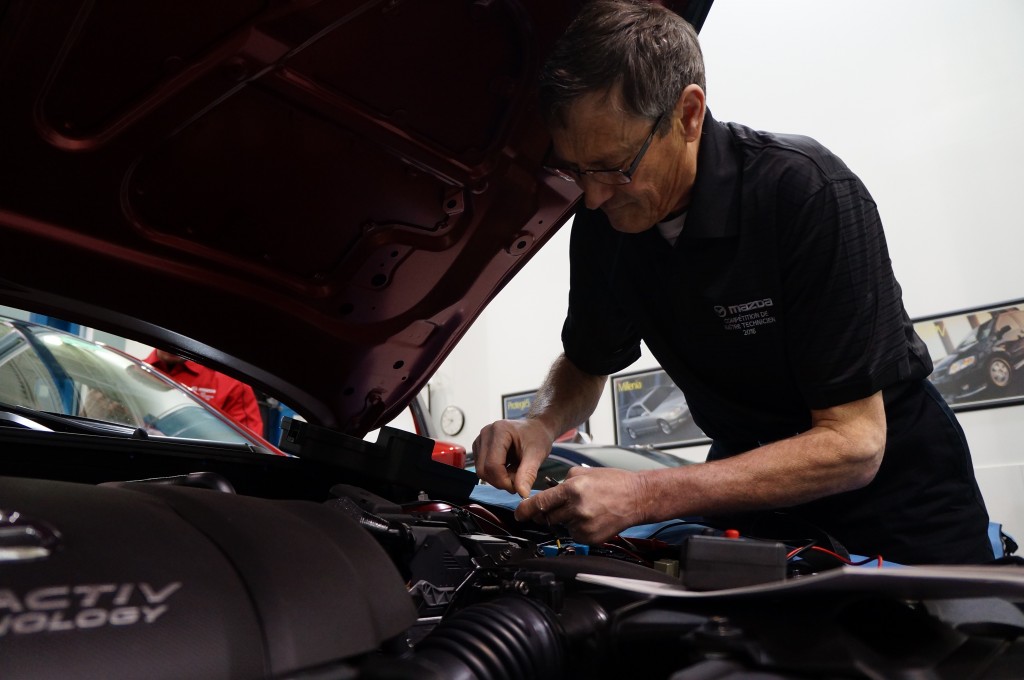 Lallo Mazda in Brantford, Ont. must be doing something special. This is the third year in a row that one of their techs has won the Mazda MasterTech Competition. This year it was Joe DiSabatino.

The technician at Lallo Mazda in Brantford, Ont., won Mazda Canada’s Master Tech Competition in March, just as he did two years ago.

It is the third win in a row for Lallo Mazda. Another of their four technicians, Christopher Doktor, won the title last year.

DiSabatino says the win feels great, but he’s quick to add that he was impressed with all of the competitors, describing them as superb technicians

“Before I left, one of the guys here wished me well. And I thought, yeah, what are the chances of winning again, so I wasn’t anxious to go,” says DiSabatino. “But they told me, ‘Just go and do what you do at work.’ And they were right. That’s what we do, right? We troubleshoot vehicles every day.” 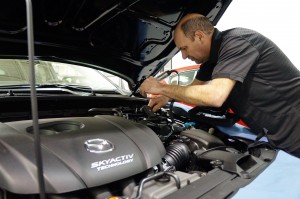 Steeve Potvin of Beauport Mazda in Quebec City came in second – a particularly impressive feat considering it was only his first trip to the national competition. All the others were on repeat visits.

Steeve Potvin of Beauport Mazda in Quebec City came in second. It was his first trip to the national competition. Lee Poetter of Dubois Mazda in Woodstock, Ont. was third.

“These guys are the best,” says Mazda technical trainer Craig McQueen. “They’re really interested in what they do, they have the passion, they learn on their own, and they constantly want to know more.”

McQueen trains Mazda techs in Ontario and Atlantic Canada. Pierre DesChamps covers Quebec, and George Benda covers everything west of Ontario. All three agree that the competition has become a critical component of Mazda’s interaction with technicians. 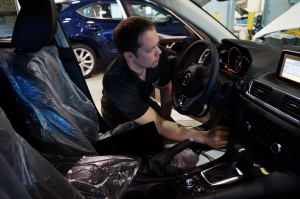 Lee Poetter of Dubois Mazda in Woodstock, Ont. placed third in this year’s competition. “Prepping for this is kind of hard because you don’t know what they’re going to throw at you,” he says.

“Without question they become more loyal to the brand. Any time a technician has been here, they try so hard to come back again,” says McQueen. “The competition just to get to the finals is unbelievable. And if all our technicians knew how well they’re treated when they’re here, everybody would try to get in.”

This competition is open only to the company’s master technicians – those who have been a Mazda technician for at least three years and have passed three new-model courses, four technical courses, six online courses, and a final exam.

In order to get a spot in the annual MasterTech competition, they must do well in a special exam handed out early in the year. Participants get three weeks to research it, fill it in, and return it. Time is a factor, in that if two get the same score, the earliest arrival gets preference.

The top three marks get an invite automatically, regardless of what region they come from. Then there are two from Western Canada, two from Ontario, two from Quebec, and one from Atlantic Canada.

“I don’t know how they come up with the questions on those entry tests,” says DiSabatino, “but they get you looking at things that you probably didn’t even know existed before. I feel it is one of the greatest teaching tools they have.”

Indeed, training is an ongoing priority at Mazda. Courses are not mandatory but participation is strongly encouraged, and dealers make it an attractive proposition, paying their techs their hourly time to be there, as well as food, travel, and accommodation.

“It’s an investment that pays off,” says McQueen. “Their technicians get the job done quicker, there are fewer comebacks, and the customer’s happier.”

In places like St. John’s, Nfld., where access to training is not always easy, some dealerships will go so far as to shut down the whole service department and send everybody to class.

The competition has long been used to show appreciation to the company’s army of nearly 1000 technicians. Canadian winners would then be invited to compete in the North American finals. The winners of that event would be sent to the world competition in Japan.

Unfortunately, DiSabatino won’t be able to test his skills in other markets. Immediately after 2008, when the world economy soured, all Mazda competitions were put on hold.

In 2013, Mazda Canada became the first market to resume its Master Tech Competition. There are rumblings that the U.S. and Japan may soon restart their own competitions, but until they do, it’s fair to say that DiSabatino stands alone as the brand’s top competing technician.