Jumping in with both feet

J.P.’s Garage in Moncton, wins the Automotive Aftermarket E-Learning Centre’s Best of the BEST Award for 2014. 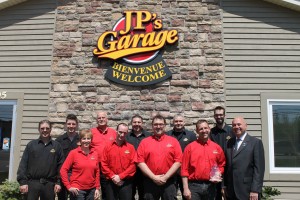 J.P. Belliveau figured if he was going to hire a consulting firm to help him improve his business, he might as well follow the advice without reservation.

The owner of J.P.’s Garage in Moncton, N.B. signed up with the Automotive Aftermarket E-Learning Centre (AAEC), enrolled in its Business Evaluation Support and Training (BEST) program, and started taking classes with management expert Bob Greenwood.

“I jumped in with both feet,” Belliveau says, “trusting that they knew what they were talking about.”

In three-and-a-half years, he has restructured the business, expanded his facilities, doubled his staff, implemented dozens of new processes, and completely changed his approach to customer service.

“It took us a long time to learn the systems properly, but we learned them inside and out,” he says. “And we applied everything in order to serve our clients properly.”

His investments started to pay dividends almost immediately. He now has a profitable business model, a great team of motivated professionals, and a rapidly expanding client base.

And this year, J.P.’s Garage has been awarded AAEC’s Best of the BEST Award.

The announcement was made in June during a surprise visit by Greenwood to Belliveau’s shop in Moncton’s east end.

“They just showed up at the shop. I thought it was a regular on-site visit. But when they presented me with the award I was very honored,” he says.

“My first thought was, ‘Why us?’ I see a lot of good shops that are in the program, and they’re doing some very good work. But everything is calculated on how you’ve improved, and apparently we came out on top.”

AAEC founder Bob Greenwood says the team effort at J.P. Garage during 2014 dramatically changed the culture and profitability of the operation, making it the leading automotive service shop in Moncton.

“Their professionalism and accountability to each other and their clientele, coupled with the perseverance to see the changes come to fruition, was a true example of entrepreneur discipline,” says Greenwood. “We’re very proud to have J.P.’s Garage as a client of AAEC and know that this operation truly offers an exciting career for their staff and management. They will be outstanding in the coming years, as they continue to move their business forward.”

The annual award is presented to the shop that has improved the most in a single year, compared to other AAEC BEST shops across Canada. Greenwood and his team analyze 13 key business measurements to determine who has made the most progress.

For his part, Belliveau credits his staff with the win, saying they enthusiastically adopted AAEC’s Vehicle Integrity Manager (VIM) program, which stresses pre-booked appointments, thorough inspections, and clear follow-ups on every visit.

“We’re definitely taking care of our clients a lot better,” he says. “This program makes our job go a lot easier.”

With the paperless VIM program, everyone in the shop works on a laptop, tracking a vehicle’s progress from the time the client checks in at the front counter, through the inspection process, and until repairs are completed and the vehicle is delivered back to the client.

The system also allows the shop to flag potential trouble points and declined work, which can be reviewed during the vehicle’s next prebooked visit.

“I would say 95 per cent of our clients love our prebooking system,” says Belliveau. “We’re taking the responsibility for tracking that, and they know we’ll call two weeks before the appointment and again two days before.”

After the work is done, he personally makes the follow-up phone calls to make sure everything was done correctly and there are no problems. That’s part of his new role as head of customer relations.

“The hardest part for me was learning how to delegate some of the work that I was doing,” he says. “This holds me accountable for what really is my job – and that is to build strong relationships with my clients.”

In fact, he has been known to jump in the shuttle car to give his clients a lift home or to the office. It’s a chance for him to get to know them and find out what they’re looking for in a repair shop. 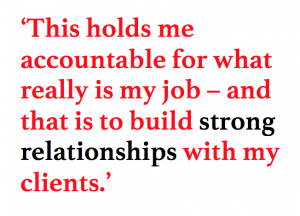 Everyone on the team knows their responsibilities. He works closely with his five technicians, three service advisors, and receptionist, and he is thrilled with how well they’ve taken to the new VIM program.

“I have a fantastic team that works with me. If you have the support of a staff that works with you and believes in you, that makes it so much easier,” he says. “This award is not just for me. It belongs to all of us. And I’ve told them so.”

He believes joining AAEC was the best business move he’s ever made.

And, perhaps more importantly, shop owners have to be prepared to jump, like he did, with both feet into a new reality.

“You have to think outside of the box, because the old way of running a shop is a broken model.”

Allan Janssen is the editor of CARS magazine. You can reach him at 416-614-5814 or allan@carsmagazine.ca