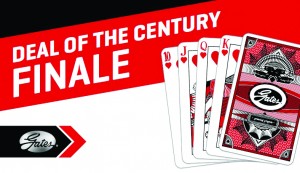 Three shop owners have won free trips to Industry Week in Las Vegas this week, to compete for the grand prize of $100,000 in the Gates Century Bucks Contest.

During the Automotive Aftermarket Parts Exposition (AAPEX) on Nov. 4, they’ll receive a set of 20 envelopes containing one playing card apiece. After selecting five envelopes to make up their official hand, they will open the envelopes. Audience members will be able to watch the contestants pick their cards and see what hand turns up for each of these lucky shop owners. Prizes will be awarded based on the cards in their hand. A Royal Flush winning hand will be worth $100,000.

“Since we are in Las Vegas, we thought this would be a memorable way to conclude our promotion,” said Todd Hack, vice president of automotive aftermarket. “Though this is a fun event, the underlying message is an important safety reminder to the auto care industry about systematic inspection and repair. We want to encourage technicians to inspect and replace all worn components in a system, not just a belt. Since all components in a system wear at about the same rate, this program urges techs and shop owners to think about the system as a whole and replace all worn components at the same time.”

The event will be emceed by Scott Howat, director of marketing and product management for Gates.

The Gates booth at AAPEX 2015 will also include information on the company’s ongoing “Be System Smart” initiative launched last year that emphasizes a systematic approach to auto care and subsequently drove the Century Bucks promotion.