As an automotive instructor, one way of measuring the “soft spots” in my students’ understanding is by paying close attention to the questions that get asked.

If a topic comes up frequently enough, you know there’s an underlying problem that needs to be clarified.

With this in mind, let me go over two brake-related topics that are regularly the subject of in-class questions. 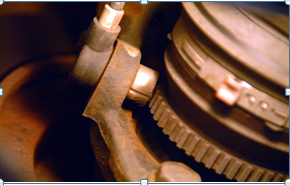 One of the main concerns is brake vibrations caused by rotors going “out of round” – usually evidenced by excessive vibrations and brake noise.

It’s pretty safe to say that modern machine processes at the manufacturer’s end are pretty reliable. If you’re dealing with a reputable manufacturer, chances are the rotor left the factory true. So if you’re seeing warpage, it likely occurs during shipping or installation. And since we can’t control the shipping process, let’s focus on how we can improve the installation process to prevent comeback due to excessive vibrations in the brakes.

It really doesn’t take a lot to cause a brake vibration. As little as 0.13 mm out of parallel on either side of the rotor (5/1000th of an inch) can cause a comeback for noise or vibration. The solution is found in ensuring a clean, properly torqued, and correctly assembled system.

Here’s what you need to keep in mind:

If these steps sound basic, it is because they are. The number of vibration and noise-related comebacks suggest they are not being done as automatically as they should be.

Another issue I’m constantly asked about is the dreaded unwanted ABS activation. You know, that terrible feeling just as the vehicle is coming to a stop when the ABS kicks in and the brake pedal drops. There are numerous technical service bulletins addressing this concern. 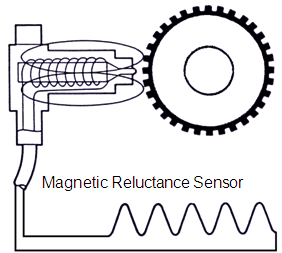 Data from the magnetic fields that are created as the wheel turns are mapped as a wave form.

A solid understanding of the sensors and how the system operates will speed up your diagnosis of the problem.

The ABS system uses sensors at each wheel to detect its speed. These sensors use magnetic reluctance. As the trigger wheel revolves with the wheel, it passes the magnet. The magnetic field creates a positive AC voltage signal as it approaches, and a negative AC voltage signal as it leaves. This generated AC voltage is relayed to the ABS controller where it converts it into a square wave DC voltage. Using the amplitude (strength) and frequency of the signal, the controller makes all its decisions.

The problem with the unwanted ABS activation is usually related to sensor input. If the frequency (rpm) drops, the controller will believe the wheel has stopped turning. If the mounting surface of the sensor is rusted and pushing the sensor tip away from the trigger wheel, the peak-to-peak strength of the signal is reduced. In both cases, the controller will command the release valve to adjust pressure to the affected wheel’s brake caliper. 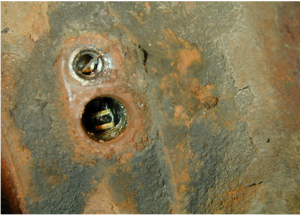 Rust build up on the hub surface. Yes, that is a sensor that has broken off.

In the case of increased air gap, there still is a signal present – you’d see it if you used a lab scope – but the peak-to-peak amplitude isn’t strong enough for the controller to recognize it as a valid input. Removing the sensor (if that’s possible) and cleaning the rust off the mating surface will restore the proper air gap and increase the sensor’s output. Now the ABS won’t kick in unnecessarily.

The problem is which wheel is causing the problem. Really you have a 1-in-4 chance of getting it right (still better than any lottery I know of) but removing four rusty sensors without breaking them is far from a dream job. Nevertheless, I like to look at all the sensors. I may find one that is marginal but hasn’t yet started to cause a problem. Replacing it now eliminates a potential comeback in a month’s time for the same problem, just at a different wheel.

I locate the offending sensor by graphing the sensor outputs and looking for a ‘late’ signal rise compared to the others, or an early drop off.

If you’re not a fan of graphing, you can watch the ABS valve command on a scan tool and see which wheel sees a pressure drop during the event. 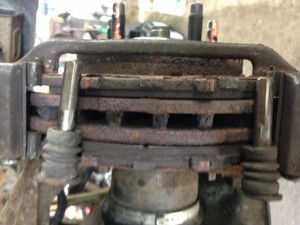 Is it always the sensor? No, but after time you will start to recognize patterns in the scan data that will help speed up your diagnosis.

A broken trigger wheel will give the same reaction as a dirty sensor. But with careful analysis of the scan info, you’ll notice a difference in the sensor’s dropout. Thinking about it logically, a rusted mounting surface is not a variable. It’s consistent in its appearance. A cracked trigger wheel, on the other hand, may show up in a varied range of speeds due to acceleration or deceleration. If the trigger wheel slips on the axle, causing the signal to stop momentarily, the controller will believe the wheel has stopped turning.

Now, you might be dealing with a digital sensor. It works on the same principle but it automatically converts the AC signal into a square wave pattern. The great thing about digital sensors is that they either work or they don’t. If the air gap is too great to allow a strong output voltage, the sensor just stops. It won’t output a signal. That makes life simpler for you. Just remember, if a digital sensor stops working, it could be because of a rust build-up. Clean the mounting surface and see if that clears up the problem. 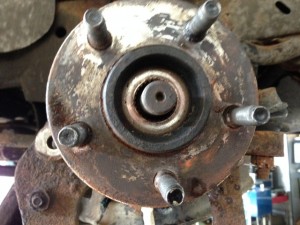 Understanding how the sensors function and what can cause them to malfunction will greatly improve your diagnostic time, whether an indicator light is on or not.

The controller will only react to the signals it’s given and if the signal is incorrect, the module will still react accordingly. A lot of techs seem to misunderstand that point and blame the controller.

I find it’s better to take a step back and try to see the problem from the controller’s point of view.

After all, it always gets the final word.

Scott Weatherill is a Class-A licensed technician who works at the family shop, George’s Auto Service, in Markham, Ont. He is a frequent trainer with the Carquest Technical Institute.