ASA board of directors installed during annual business meeting 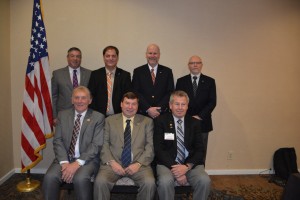 Toronto shop owner John Cochrane was among those installed as directors of the Texas-based Automotive Service Association (ASA) at the group’s recent annual general meeting.

Cochrane, who operates Cochrane Automotive in Toronto’s west end, was appointed to the post late in 2015 to fill a vacancy. The recent election of directors confirms his place on the board.

The new board commenced their term at the close of the annual business meeting. Serving the second year of their two-year terms on the board are:

Dan Risley, ASA president and executive director, also serves on the ASA board of directors in an ex-officio capacity.

They were installed at the ASA annual meeting in Arlington, Va. on April 25-27, held in conjunction with association’s Lobby Day on Capitol Hill in Washington, D.C., during which members visited with elected officials and senior staff members about legislative and economic issues that impact the automotive service and repair industry.

The Automotive Service Association is the largest not-for-profit trade association of its kind dedicated to and governed by independent automotive service and repair professionals. ASA serves an international membership base that includes numerous affiliate, state and chapter groups from both the mechanical and collision repair segments of the automotive service industry.

You can read our article on ASA electing its first Canadian director here.