Topics of discussion included the skilled labor shortage, the importation of asbestos-laden automotive parts, and the importance of vehicle safety on public roads. 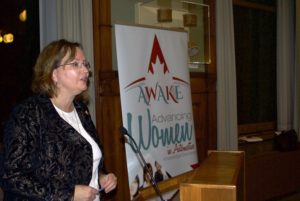 “We know there is historical under-representation both in your line of work, and – I’ll just say it – in my line of work as a politician,” she said at a Queen’s Park reception on Nov. 30, “but we can work to change that.”

Speaking to senior aftermarket executives, the minister responsible for women’s issues encouraged them to continue on the path toward gender equality.

“You certainly have demonstrated your commitment to breaking down barriers for women in your industry. I think you’ve shown exception leadership in advancing women with the ‘Advancing Women’s in Automotive Knowledge Exchange’ initiative. You’ve taken a close look at your sector to identify not only the obstacles that women face in your workplaces but also how to clear a path.” 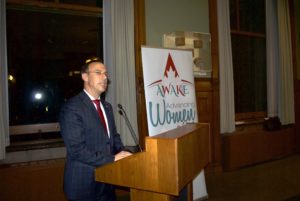 AIA President Jean-Francois Champagne addresses Ontario politicians and their staff at a reception following a day of lobbying at Queen’s Park Nov. 30.

“I share your commitment to women’s empowerment,” she said. “In 2016 I think we can all recognize that no industry should be considered ‘male dominated.’ Unfortunately, that is the reality in some industries. Women should be able to fulfill their full potential without obstacles being in their way. They should not have to work twice as hard just to get ahead and prove that they’re capable.”

MacCharles got a laugh when she suggested that part of her credentials to speak about automotive repair and service issues dates back to her high school days when she was the only girl in her auto mechanics class. 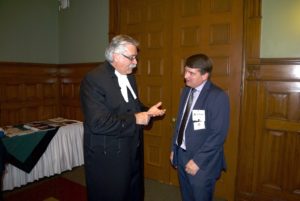 “And I got the highest mark too, I’ll have you know!” she said with a smile.

The reception, hosted by the Automotive Industries Association of Canada, followed a day of meetings intended to bring information about the automotive aftermarket and its most pressing issues of concern to legislators and their staff.

Topics of discussion included the growing shortage of skilled trade workers, the importation of asbestos-laden automotive parts, the importance of vehicle safety on public roads, and the need for open access to increasingly sophisticated automotive systems.

The predominant message, said AIA president Jean-Francois Champagne, was that the automotive aftermarket plays an important role in public safety, environmental responsibility, and the national economy. The full day of high-level meetings at Queen’s Park was heralded as a positive step toward greater cooperation. 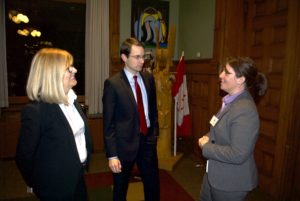 “I think what we are learning from our meetings is that there truly is a capacity for industry, educators and government ministries to work together to bring more people into the workforce, bringing qualified people – not just men but women as well – into the automotive industry,” he said at a reception for politicians and their staff.

“It is in meetings like the ones we’ve had that we know we can make Ontario a better place for Ontarians and for our industry.”

The lobbying day was designed to offer aftermarket support for key mandates of Ontario’s Liberal government, including creating a strong knowledge-based economy and building a highly skilled workforce.

Delegations were scheduled to meet with:

* MPP Cristina Martins, policy advisor to the Minister of Economic Development and Growth,