Rae McLennan of Allenford Automotive is calling it a career after 50 years. 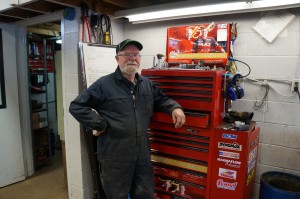 Late in the game, when technician Rae McLennan was 57 years of age and already starting to think about retirement, the shop where he worked was sold.

Rae told the new owner of Allenford Automotive in Allenford, Ont., just west of Owen Sound, that he’d give him three years of service, and then he was calling it a career.

He ended up giving him a full decade. And when he finally hung up his tool belt at the end of April, Rae had completed his 50th year as an automotive technician.

“Actually the last 10 years have probably been the best of my career,” he says. “In terms of training, working environment, equipment… it’s been a really good experience.”

In fact, he says he’d like to continue working. The mind is willing, but the body is weak.

“It’s all the aches and pains,” he says. “You get to a point and the body just starts to fall apart. It’s the cement underfoot. I’m sure that’s what it is. And slugging 20-inch tires. That will kill you!”

Rae’s boss, Randy VanDoornik, was happy to get the bonus seven years.

“It’s going to be a challenge to replace him, that’s for sure,” says Randy. “Rae’s a good tech and he knows a lot. It will be tough to find someone with a wide variety of experience like he has.”

What surprised Randy was that not only did Rae stay seven additional years, but he put a lot of effort into those years.

“He kept buying tools, he invested in a new tool box, and he took training right to the end. A lot of other guys would have seen the light at the end of the tunnel and stopped learning, but not Rae.”

So, what has a 50-year career taught Rae? The lessons are too many to count, says Rae. But in talking with him over an hour or so, you get a good sense of what he makes of this industry, what’s going right, and what we need to do better.

“It was the best training I could imagine,” says Rae, “because they really knew their stuff, and I would work with each one for a week to learn a new specialty. It would be brakes and front end one month, and then tune-ups the next – and we did a bucketload of those back then – and then transmissions or rear-ends the next. I think I got my best training that way.”

He realized then that continuous learning is the key to success as a technician.

“If I were 30 years younger, I’d be getting all the electrical schooling I could get,” he says. “It wouldn’t matter the cost or the time. That’s where the future is. That, and flash reprogramming. There’s a growing demand for that.”

He says some techs may resent the emphasis on training but they need to get over it.

“Some guys think once they have their ticket they don’t have to learn anymore. Well, that’s just so wrong. Education needs to be an ongoing thing in this trade. Until you die. There’s always new stuff to know and if you don’t learn it, you’re going to be a dinosaur. And if you’re a dinosaur, no one’s going to want you.”

Look to the next generation

Rae believes the automotive repair and service industry is the place for young people who enjoy a challenge.

“If young people are keen, not afraid of electrical stuff, and take pride in what they do, this is a great trade for them. We have to let them know what a great career they can have here,” he says.

It does require an investment in tools and they’ll never get done learning, but Rae believes the next decades are going to be an exciting time for the industry.

Rae believes one of the biggest difficulties in business today is setting prices. Every one needs to make a profit. But there’s a fine line between charging fairly and getting greedy.

He discovered the challenge of pricing his work when he opened his own garage, McLennan’s Service Centre in Tara, Ont., and ran it for 14 years. It was at a time when you could be the boss and still work most of the day under the hood of a car.

“In a small town, people talk,” he says. “If they get burned, they’ll tell their friends.”

He thinks customers know how to scrutinize a bill. They’ll see pretty quickly if you’ve charged more than you should have for parts or labor.

“If you treat people fairly – and I don’t mean you have to give the store away, but do an honest job and a good repair – you’ll have a customer for life. You’ll get the second and the third generation,” he says. “Treat people right and they’ll come back.”

Last fall, Rae finally started thinking he was getting too old for the trade.

“I might have been doing front end work or something, and I just thought, ‘This is just silliness. Why don’t you just quit this. Your wife’s got a bucket list, and you’ve got your hobbies. Why don’t you go do that instead!’”

His boss, Randy congratulates him for and for sticking around the shop until he was 67.

“That’s seven more years than he promised me,” says Randy. “He’s had a fantastic career and I’m proud that he finished it off with me and enjoyed it to the last day.”