This week Statistics Canada released a positive report on the Canadian economy that exceeded expectations.

A quick look at September auto sales confirms that parts of our economy are indeed performing strongly. September set yet another same month light vehicle sales record with 174,337 units, up 3.7 percent from September 2014. This pushes YTD light vehicle sales up to 1.461 million units, an increase of 2.5 percent. Seven of nine months this year have set same month records.

More importantly the strength in the market in September sets Canada up with the possibility of another record year. That being said sales in the final quarter last year were extremely strong in 2014 so there are some tough comparables to beat. We remain cautiously optimistic.

There are a lot of stories under this umbrella of positive sales. Looking at some of the smaller volume brands for instance, Subaru was up 11.2 percent in September and continues a long streak of growth and are now up 11.7 percent year to date. Both Porsche and Land Rover had high double digit growth in September (39.0 percent and 58.3 percent growth respectively) and both will reach annual records this year. Almost all the luxury brands are heading towards record years although month-to-month there is some volatility.

With regard to the battle for sales leadership, Ford always seems to turn on the thrusters in the last half of the year and once again this is the case. Ford sales are down 4.9 percent on the year but were up 3.9 percent in September and they took over the top selling position for the month. FCA is still ahead in the sales leadership race on a YTD basis but by only about 10 thousand units. The top three OEMs will sell over 200 thousand units in the last quarter so a 10 thousand sales lead is actually quite small. Expect yet another battle between Ford and FCA on this front.

Another somewhat forgotten good news story this year is General Motors who have quietly been having a very good year. September sales were up by 1.6 percent and are tracking up by 5.5 percent YTD. GM is still well behind both FCA and Ford but it wouldn’t surprise us at all to see a much tighter three way race for sales leadership next year. 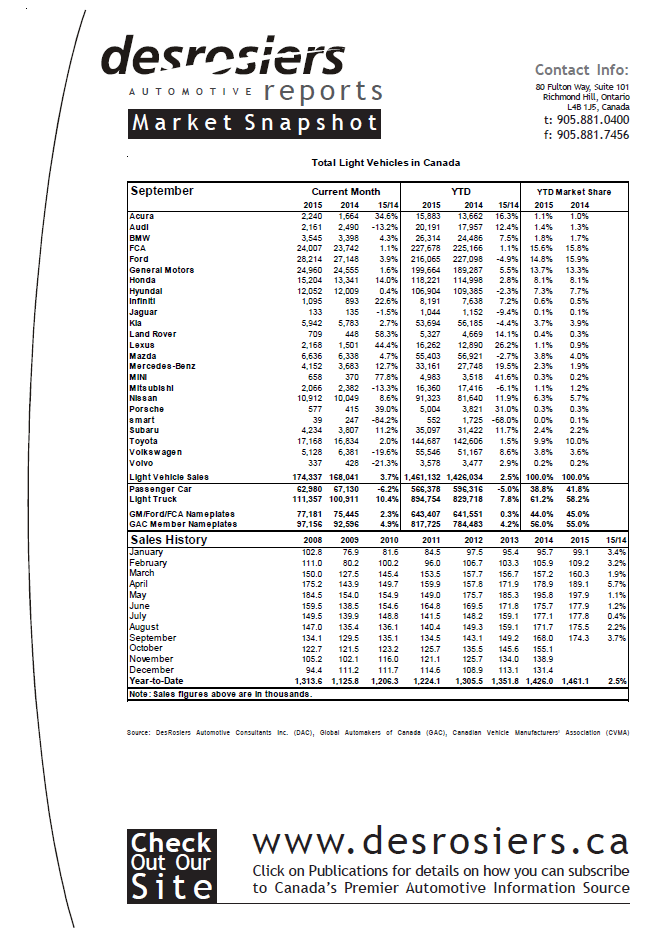