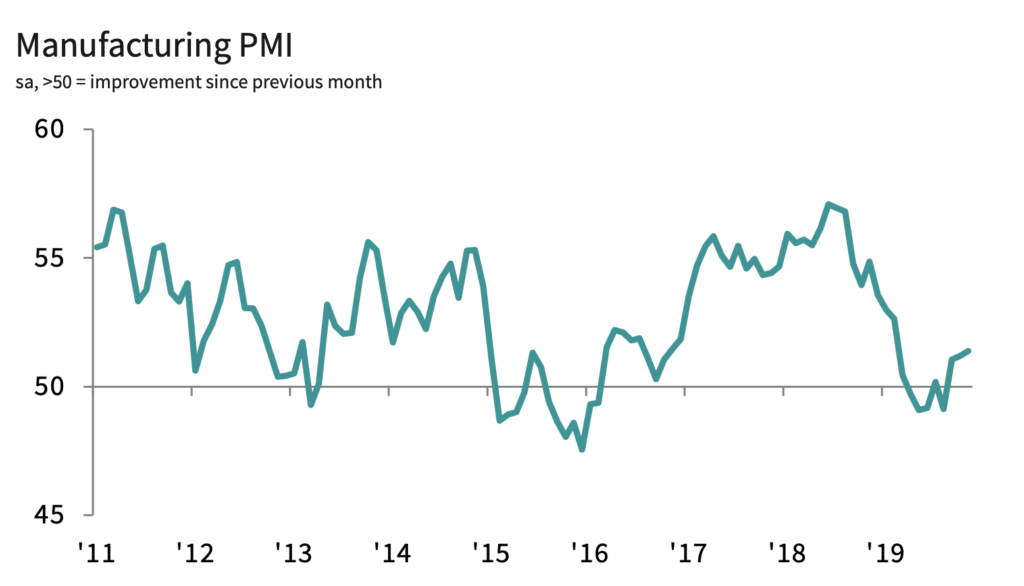 IHS Markit is reporting that Canadian manufacturers signalled an improvement in their overall business conditions during November, which marked three months of sustained recovery.

The IHS Markit Canada Manufacturing Purchasing Managers’ Index posted a score of 51.4 in November, up slightly from 51.2 in the previous month and the highest reading since February.

The manufacturing sector
has started to find its feet again
after a soft patch
during the third quarter of the year.
November data reveals
another modest recovery
in tandem for three months running.
However, underlying
growth momentum remains
lacklustre in comparison to
historic trends and this
continues to hold back
job creation as well as
near-term business optimism.

However, the degree of growth momentum remained relatively subdued, IHS says. Falling export sales was a key factor acting as a headwind to manufacturing performance during the latest survey period.

Business optimism regarding the year ahead outlook also dipped in November, with this index reaching its joint-lowest level since February 2016.

The modest improvement in business conditions was underpinned by continued increases in output, new orders and employment.

Mirroring the trend for overall manufacturing performance, growth in production was the fastest for nine months in November. Survey respondents often noted that rising domestic demand had led to greater output requirements. By sub-category, the strongest pace of expansion was reported by consumer goods producers, while investment goods once again signalled the weakest output trend.

November data pointed to a modest increase in new work received by manufacturers in Canada, although the pace of expansion eased slightly from the eight-month high seen in October. The loss of momentum largely reflected a weaker contribution from export sales, with new work from abroad dropping to the largest extent since July. Manufacturers cited intense competitive pressures and some firms commented on softer demand from clients in the US.

There were signs that manufacturing capacity remained sufficient to meet both new and existing orders. This was signalled by a reduction in backlogs of work for the ninth month in a row during November.

A lacklustre degree of job creation persisted across the manufacturing sector. Subdued optimism towards the year ahead business outlook also held back employment growth in November. The level of confidence was the joint-weakest since February 2016 (equalling the low point seen in August).

Stocks of finished goods were trimmed to the largest extent for seven months in November, which manufacturers overwhelmingly linked to deliberate inventory reduction. In contrast, a modest rebound in purchasing led to rising stocks of inputs and longer delivery times from suppliers during the latest survey period. There were also some reports that rail strikes had contributed to supply chain disruption.

Input cost inflation meanwhile picked up to a seven-month high. Rising operating expenses were partly offset by an increase in factory gate charges, with the pace of inflation reaching its highest since May.