Light truck sales continue to jump as passenger cars fall to lowest level since the 1960s. 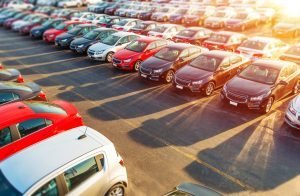 Canadians last year purchased more than two million vehicles for the first time thanks to record sales of light trucks.

“The new record currently stands at 2,038,798 units sold in Canada, an astonishing total that has come off the back of nine months seeing record levels of sales,” it said in a news release Wednesday.

The milestone was reached despite lower sales in the last two months of the year when sales fell 1.1 per cent in December and 1.2 per cent in November.

Sales in 2017 increased 4.6 per cent over 2016, marking the eighth consecutive year of sales increases since the financial crisis of 2009.

Ford said its F-Series remained Canada’s favourite pickup for the 52nd consecutive year and the best-selling vehicle for an eighth year with sales of 155,290 units.

Its Escape was also the leading SUV with sales of 47,880 units.

General Motors sales grew mainly due to a 17.5 per cent increase in the GMC brand. However, Chevrolet remained its largest brand as sales increased 12.9 per cent to 171,000 units. Buick was down 0.4 per cent to 18,981 vehicles.

The Detroit automaker said it sold 2,122 new all-electric Bolt vehicles, while sales of hybrid electric Volts increased 24 per cent to 4,313.

Despite lower overall sales, FCA said its Ram brand had a record year with sales increasing 10 per cent to 103,843 vehicles.

The carmaker said the three products manufactured at its Brampton Assembly Plant saw sales increase. Dodge Challenger and Charger sales were up eight and 30 per cent respectively, while Chrysler 300 sales were up 18 per cent.

It remained the leading minivan provider with sales of Canadian-made Chrysler Pacifica vans increasing 142 per cent, while Caravan sales were off nine per cent.

U.S. auto sales fell 2 per cent to 17.2 million in 2017, according to Autodata Corp. It was their first year-over-year decline since 2009, ending an unprecedented seven-year expansion.

Analysts think sales will fall a bit further this year. While low unemployment and rising consumer confidence are expected to boost demand, rising interest rates could make it more expensive for people to finance new vehicles.

Vehicles also are becoming more durable so consumers can keep them longer, further putting a drag on sales. The average age of vehicles on the road has climbed to 11.6 years, up from 8.8 years in 1998.

The growing popularity of leasing will also have a big impact on 2018 sales. Almost one-third of new vehicle sales were leases in 2015, and many of those 4 million lessees will be trading in their vehicles for new ones, according to the car buying site Edmunds.com. (Edmunds regularly provides content, including automotive tips and reviews, for distribution by The Associated Press.)

But leasing also has a downside for automakers, since the influx of late-model used cars returning to the market will cut into sales of new vehicles.

Tax cuts also could be a mixed blessing. They will likely stimulate demand, particularly for commercial trucks and vans. But the more the economy grows, the more likely it is that the government will raise interest rates, Chesbrough said.