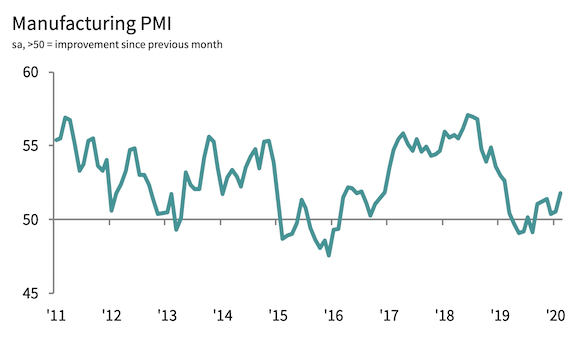 The gradual recovery in business conditions across the manufacturing sector continued in February, according to the latest data compiled by IHS Markit. Production volumes increased for the sixth month running, supported by the fastest rise in new orders since October 2019. Moreover, export sales returned to growth in February, with Canadian manufacturers noting that greater demand from US clients had helped to offset weaker spending in the Asia-Pacific region.

At 51.8 in February, up from 50.6 in January, the seasonally adjusted IHS Markit Canada Manufacturing Purchasing Managers’ Index registered above the 50.0 no- change value for the sixth consecutive month and pointed to the strongest overall improvement in business conditions since February 2019.

The rise in the headline PMI mostly reflected faster rates of output and new order growth, alongside a modest rebound in employment numbers during the latest survey period. Production volumes expanded at the strongest pace since last November, despite a small number of reports that supply chain delays had disrupted business operations.

Latest data indicated the sharpest lengthening of average lead times from suppliers for 12 months. Worsening vendor performance was attributed to a combination of rail transport blockades and delays with the receipt of items sourced from suppliers in China.

Meanwhile, new work received by Canadian manufacturers increased for the second month running in February. The sustained rebound in sales volumes was helped by an upturn in new export orders for the first time since September 2019.

Despite a modest increase in new business intakes, latest data signalled another reduction in backlogs of work across the manufacturing sector. Survey respondents mainly linked to a lack of pressure on operating capacity and successful investments in new plant machinery.

Payroll numbers increased slightly in February, which contrasted with the fractional decline in employment that was reported at the start of the year. Moreover, manufacturers remain optimistic about their prospects for output growth in the next 12 months, with the degree of positive sentiment only slightly lower than in January.

Meanwhile, input buying continued to fall in the latest survey period. Lower volumes of purchasing activity have now been recorded in each of the past three months, largely reflecting efforts to reduce pre-production inventory holdings. Stocks of finished goods also declined in February, which continued the downward trend seen since October 2019.

On the inflation front, average cost burdens increased at a robust and accelerated pace in February. The latest rise in input prices was the fastest since April 2019. Pressure on margins contributed to another modest upturn in factory gate charges during the latest survey period.