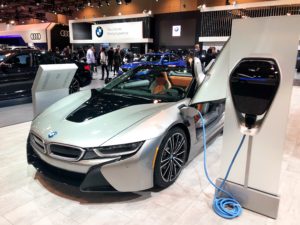 An electric vehicle from BMW gets charged at the 2019 Canadian International Auto Show.

All light-duty cars and trucks sold in British Columbia would have to be zero-emission by 2040 under legislation tabled recently.

The legislation would apply to new vehicles for sale or lease.

Mungall says zero-emission vehicles are part of the government’s $902 million CleanBC program to cut greenhouse gas emissions by 40 per cent by 2030 based on 2007 pollution levels.

She says the CleanBC plan includes incentives for zero-emission vehicle purchases up to $5,000 on a new battery electric or plug-in hybrid electric vehicle and up to $6,000 for a hydrogen fuel-cell vehicle.