Part 6 of 7 in an exclusive series

This is the sixth in a series of article on changing vehicle technologies – exclusive to the AutoServiceWorld Knowledge Centre. Award-winning tech writer Jeff Taylor offers a look at some of the latest innovations in the automotive world, how they work, how they’re evolving, and what they mean to the aftermarket.

Vehicle manufacturers have a hit on their hands with parking systems that make bumps and scrapes a thing of the past.

Parking a vehicle is something that most people had to do get their driver’s license, and most Canadians think they’re pretty good at it.

A recent study found that 80% of drivers are confident in their parallel parking capabilities, and they don’t trust the technology that is available to self-park a vehicle.

But when the human driver and the computer-driven park assist are compared for parking ability, the self-parking features that are currently available outperform the manual driver in speed (10% faster), accuracy (47% less maneuvers) and the reduction of curb strikes (81% fewer) even if the vehicle is equipped with a standard back-up camera. 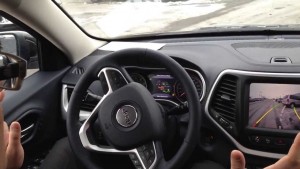 The fact that many vehicles now have huge blind spots and low, wide B and C pillars has only made the task of parking and backing up that much more difficult. Add in a child’s car seat or rear passengers, and it gets really complicated!

Back-up aids or parking aids started simply as a system that detected objects and monitored their distance from the car, providing an audible tone or flashing lights when the vehicle was backing up. These systems progressed and incorporated a camera and a display screen on the rear-view mirror or the dash, providing real time images of what was behind the vehicle when backing up.

Eventually, some manufacturers added a set of superimposed grid lines over the back-up camera’s display. These guidelines swing with that direction of the steering wheel and project the path of the vehicle, providing more safety and driver ease. 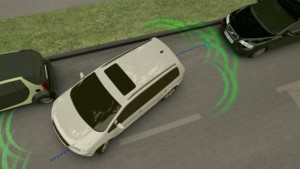 But it hasn’t stopped there.

Many vehicles can park automatically now, safely back out of blind parking spots, and reverse effortlessly… even with a trailer attached!

Cross traffic rear sensors, cameras, and a myriad of other components that are typically already installed on the modern vehicle for other systems are now being used to safely assist the driver when backing up. And the technology no longer requires a full-size desktop PC in the truck to do so.

The simplest system to assist the driver in parking or backing up will involve some form of parking sensor to aid the driver in detecting objects and distance.

The most popular detection method incorporates the use of ultrasonic sensors. These ultrasonic proximity detectors emit and detect ultrasonic acoustic pulses (40-250 kHz) and are usually mounted in the bumper facia, or bumper cover. 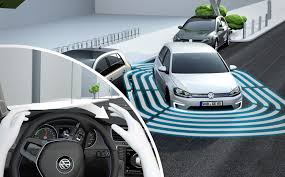 The control unit knows when the pulse was emitted, and when it hears its return it can calculate the distance to the object, using the time differential between the two signals.

Using this information, the system can signal the driver with a series of warning tones and lights.

Of course the system needs to know that the vehicle is in reverse, and also how fast the vehicle is reversing to properly calculate the warning signal. These sensors are good at detecting objects that are just a short distance away – about 200 cm (70 inches).

Ultrasonic sensors are now commonly mounted around the perimeter of the vehicle to aid in object detection, even when going slowly forward. Most of these systems have a simple on-off switch that the driver can use to deactivate the system if they don’t want to use it. 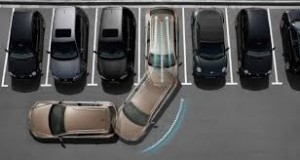 Short Range Radar (SRR) can be used not only to detect objects behind the vehicle but to detect oncoming vehicles that may not yet be visible to the driver backing up – especially if they are beside a larger vehicle.

Rear Cross Traffic Alert (RCTA) shares the two radar units that the Blind Spot Detection (BSD) system uses. These two SRR 120-degree angle sensing units are mounted inside the lower rear fenders or bumper covers. When the driver activates the system by putting the vehicle in reverse, the system starts to scan the areas to the left and right rear, looking for vehicles, bikes, people, or other objects that may be approaching undetected by the driver.

If the system detects an object, it will activate an audible alarm and some form of visual aid (LED on the mirror, dash warning) and in some cases may even apply the vehicles brakes automatically. 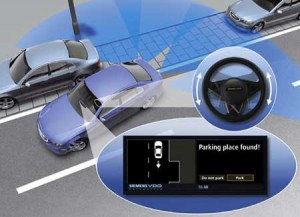 The back-up camera or cameras, which will become mandatory in 2018, are also a major aid in the reversing and parking maneuvers that a driver has to perform. The output from this camera is displayed on the dash stack or rear-view mirror and may incorporate some form of guide or grid lines.

At least one camera is going to be mandatory after 2018, but many manufacturers are using multiple cameras to provide better views. Full 360-degree bird’s eye views, involving four cameras stitched together by a processor and displayed on the centre stack with superimposed gridlines, aren’t just for high-end vehicles anymore; it’s a common option now on mid-level vehicles.

The self-parking car – featuring autonomous parking systems that some or all of the above sensors – has been in development since the early 1990s.

VW started development on a parking system in 1992; this system even allowed the driver to exit the vehicle and watch the car park itself, but this system never went to market.

Toyota introduced a system in 2003 on the Prius in 2003 – only available in Asia and Europe to start. The system was being looked at by every manufacturer.

Mainstream self-parking systems have since exploded in popularity in 2012.

Today nearly every manufacturer is offering some form of self-parking vehicle… and it will likely become the norm or the next few years.

Ford’s Active Park Assist debuted in 2012. The driver must slow to the required speed (below 35 km-h) and indicate with a directional switch what side of the car the spot is on. An ultrasonic sensor will measure the available parking spaces width to ensure the vehicle will fit (about 1.2 times the vehicle size). And then the system will alert the driver, using visual and audio signals, that a space has been found. Parking instructions will then be displayed on the dash for the driver to follow. The system takes over the steering once reverse is selected and, using six ultrasonic sensors to help pilot the vehicle, it will proceed to parallel park. The driver is still responsible for the gear selection, gas, and brake pedal application but the vehicle does the steering.

Most manufacturers now offer some form of autonomous parking feature and use any of the above technologies and sensors in object detection and ranging. Some manufactures use their rear cameras to see and detect curbs, lines on the road, and even objects. These systems are designed to be easily overridden by the operator, by touching the steering wheel, controlling the brakes, or simply turning the system off.

So what are we going to have to do to fix and maintain these systems?

Body shops have been changing ultrasonic sensors for some time, due to their location in an area prone to damage during collisions.

As many of these sensors are located under the bumper covers, they are also susceptible to corrosion and wiring issues. The same is true of the radar and rear-facing cameras.

Body shops have to be aware of sensor painting and prep procedures to insure proper operation. 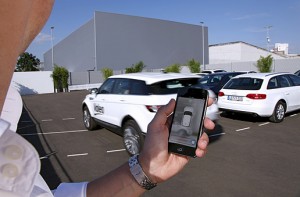 When it comes to diagnostics, a proper scan tool is going to be a must. It will have to communicate with all of the vehicle systems and allow for the proper analysis, calibrations, and software updates to be performed. This may require using a factory tool.

Most camera systems will need to be calibrated if anything has been changed in the system. The gridlines will have to be reset if something as simple as an alignment is performed. The system needs to know what the correct steering angle is.

Autonomous parking systems combine a number of vehicle systems together and they’re now interdependent on each other.

If an issue arises in a system that seems totally unrelated, it may disable the auto parking system.

Ford’s Active Park Assist will be disabled if there is an issue in the ABS system or if the traction control system has trouble codes.

Most of these systems become dormant on SUVs and pickup trucks when a trailer is installed, but resume normal function after the trailer is removed.

Snow, mud, and dirt are all going to affect the operation of these systems. If sensors can’t properly see or gauge the distances, they won’t function properly. So customers will have to be aware of that.

Many systems can be disabled, adjusted and modified using the touch screen in the centre stack or through the dash module.

The owner’s manual is going to be vital to get to all the settings that can be adjusted on these systems, and operators are going to need to know where and how to get this information to make the system work properly.

Many repair shops still have customers who can’t adjust the time on the dashboard clock… so they may need our help adjusting the parking setup.

Reversing a vehicle is getting safer and easier for the driver.

There are now so many aids that detect objects, people, vehicles, and curbs that we have progressed to the point that a vehicle can park itself. 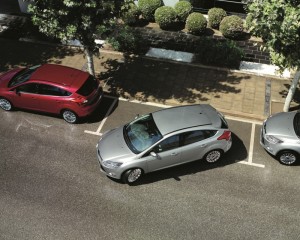 High-end vehicles can not only parallel park… they can even back into a space and pull straight into a garage using a display key system. BMW’s 2017 7 series offers Remote Parking Control that will enable the car to do the parking without even being in the vehicle. The car will pull straight ahead or reverse straight out of a tight garage or parking spot. The system is activated by remote control while out of the vehicle and is monitored by the Park Distance Control. Its 360-degree surround view sensors monitor the vehicle’s surroundings and control the brake and accelerator for safety. Once the maneuver is completed the vehicle shuts off.

Manually backing up and parking a vehicle is well on its way to becoming autonomous, and it is being embraced by consumers. The results are quick and accurate parking without any bumps or scrapes. Just stopping the scuffing of those expensive wheels and preventing sidewall tire damage is likely reason enough to allow the system to work as intended!