Dan Risley posts resignation video, saying the search is on for someone with lots of association experience. 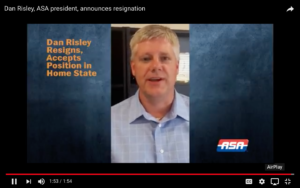 Dan Risley, who was executive director of ASA for the past five years, posted a video resignation that can be viewed on YouTube.

Dan Risley, president and executive director of the North Richland Hills, Texas-based Automotive Service Association, has announced that he will resign his post on July 13.

Risley, who tended to work remotely from his Chicago-area home for the past five years, has accepted a position with CCC Information Services Inc. in his home state of Illinois.

To ensure a smooth transition for the association, he has offered to stay on with ASA in a consultant capacity until a new association leader is named. In the meantime, ASA’s certified professional accountant Beth Risch will serve as interim chief operating officer.

Risch will oversee day-to-day operations and report directly to the ASA board of directors beginning July 2.

“I want to sincerely thank Dan for his strong leadership during a crucial time in the history of the association,” said ASA board chairman Roy Schnepper. “His natural leadership talents, his financial prowess and inexhaustible energy led him to govern ASA with success and achievement.”

He said Risley navigated ASA through an era of great change and transition, during which the association:

“ASA has served the industry for more than 60 years, and I’m proud to say I was part of its rich history and success,” Risley said. “I look forward to staying engaged in ASA and contributing to its mission of serving its members.”

He has released a video resignation in which he thanked members for five great years, and promised that AS would be soon be “ushering in a new era.”

The video can be viewed HERE.

Over the next few months, ASA will be conducting a search to find a new executive director, seeking an individual with association management experience.