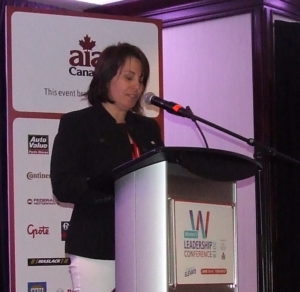 France Daviault, speaking at the Women’s Leadership Conference in Toronto in June 2018.

After four years with the Automotive Industries Association of Canada, France Daviault is leaving to head up the Canadian Apprenticeship Forum (CAF).

Daviault will start as CAF’s new executive director on Oct. 1.

She will replace outgoing CAF executive director Sarah Watts-Rynard, who spent eight years with the organization.

Daviault, who most recently served as vice president of operations for AIA, also spent some time as senior director for stakeholder relations. In tandem with her role at AIA, she was also executive director of Heavy Duty Aftermarket Canada (HDAC).

Prior to AIA, she worked for the Canadian Council of Motor Vehicle Administrators.

A graduate of Ottawa University with a BA in Psychology, France was born in Montréal, raised in Saskatchewan and currently resides in Ottawa.

The Canadian Apprenticeship Forum is a national, non-profit organization working with stakeholders in all regions of Canada. We influence pan-Canadian apprenticeship strategies through research, discussion and collaboration – sharing insights across trades, across sectors and across the country – to promote apprenticeship as an effective model for training and education.