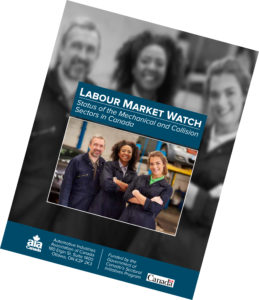 The Automotive Industries Association of Canada has published a first-of-its-kind labour market report focusing on trends and issues in the aftermarket industry.

Through four bilingual surveys that targeted frontline workers and managers in the collision and mechanical sectors, Labour Market Watch: Status of the Mechanical and Collision Sectors in Canada paints the picture of the workforce in the Canadian aftermarket, including information on education, training and gender.

The AIA, which partnered with DesRosiers Automotive Consultants on the report, expects the results to help aftermarket businesses and those working in the industry.

In its executive summary, the study reports that most people have worked in the industry for at least five years, are typically male and are employed full time.

Almost 2,500 people were surveyed, with about half responding from the mechanical side, including jobbers. In the mechanical sector, 9.5 per cent of workers are female with about 45 per cent of them identifying as being in a customer service representative role. About 83 per cent of workers are full-time employees and more than half have at least five years of experience, with a third between one and five years and the remainder with less than a year under their belt.

The report also looks at information like how likely someone in a particular role would be willing to move to do the same job in a different city or province, the desired or required education levels and the need for on the job training.

Funded by the federal government’s Sectoral Initiatives Program, the data from Labour Market Watch will be put together in an online format called AutoConnect later this year. Announced last March, reports will be made available to find jobs across the country within the industry. Information will include which jobs expect to see growth and decline over the next five years, along with salary information.

The executive summary and the full report can be downloaded at AIA Canada’s website.