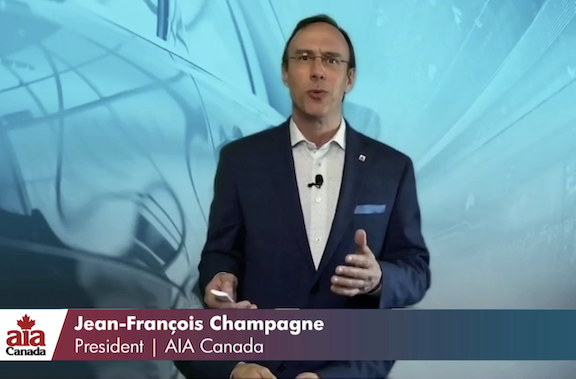 For the first time in AIA Canada’s history, members remotely attended a “virtual” annual general meeting, and cast their ballots electronically for open seats on the association’s governing committees.

Members used their computers to vote on a slate of officers that past board chairman Brent Hesje described as having “a wealth of industry skills and knowledge that will provide a strong and vigorous board to lead the association forward.” 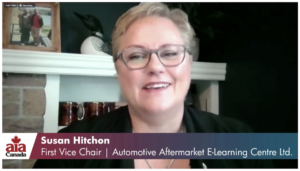 Susan Hitchon offers some thoughts on the job ahead of her as incoming chairman of the Automotive Industries Association of Canada.

The list included Susan Hitchon, business development manager for the Automotive Aftermarket E-Learning Centre, who was elected chairman of the association’s board of directors.

She is joined on the association’s executive committee by vice-chairman Bob Jaworski of Auto Electric Service in Regina, Sask., and the committee’s past-president Jason Best of Uni-Select.

It was noted during the annual general meeting – the association’s 78th – that both Hitchon and Best had inadvertently forced the board resignations of peers in their respective companies because of a rule that limits member companies to having just one employee serving on the board of directors at a time.

In her inaugural speech, Hitchon thanked members for their vote of confidence in electing her as the association’s first female chairman of the board.

She said AIA is living up to the definition of an association as “a group of people who voluntarily come together to solve common problems, meet common needs, and accomplish common goals.”

“That certainly describes the origins of AIA and still rings true today,” she said. 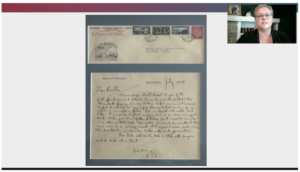 Hitchon took the opportunity to tell a personal story about a letter that hangs in a place of honour in her home. It was delivered to Canada from England in 1939, on the very first official air delivery of mail between the two countries. The letter, from Hitchon’s grandfather-in-law to her father-in-law, points out that changing technology had dramatically reduced travel time across the Atlantic. ‘Time marches on, and marches faster with each generation,’ he told his son in the letter. ‘Your task will be to keep in step with progress, and to keep out in front.’

“This family heirloom letter, reminding us to keep out in front, came to mind as an appropriate message for our task ahead,” Hitchon said. “I am confident that AIA will keep in step with progress, and keep out in front.”

Hitchon takes over as chairman from Uni-Select vice-president of sales and marketing for Canada, Jason Best.

In his final speech as chairman, Best commended AIA president J.F. Champagne for the proactive approach that he has exemplified since the beginning of this pandemic. 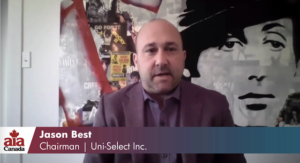 “Immediately, J.F. took the appropriate steps to protect the health and safety of the AIA staff by setting them all up in a work-from-home environment,” Best said. “And he has continued to demonstrate leadership throughout the many decisions that had to be made during extraordinary times.”

During his review of the 2019 audited financial statements, Best noted a decrease in the association’s overall revenue, attributing it in part to the loss of sponsorship funding and some cancelled events.

The biggest membership drops came in the following categories:

In his report to members, Champagne described 2019 as a productive year for the association’s two main mandates: ensuring aftermarket access to vehicle data, and workforce development and training for the industry.

“To that end, we have been very busy,” he said.

The primary goal that the association is working toward, he said, is to secure legislation that will ensure direct access to vehicle data for the aftermarket.

The virtual aspect of the meeting came with it special challenges – including that enough members had to stay online for the duration of the webinar in order to preserve quorum.

The five newly elected directors for the 2020-2021 slate of officers are:

The new directors will serve until the 2023 AGM.

For the first time in AIA Canada’s history, members remotely attended a “virtual” annual general meeting, and cast their ballots electronically for open seats on the association’s governing committees.

In the association’s first-ever web-based AGM, Susan Hitchon of the Automotive Aftermarket E-Learning Centre was elected chairman of the executive committee.

She is joined on the committee by vice-chairman Bob Jaworski of Auto Electric Service in Regina, Sask., and past-president Jason Best of Uni-Select.

Both Hitchon and Best inadvertently forced the committee resignations of peers in their respective companies because AIA member companies may only have one employee serving on a committees at a time.