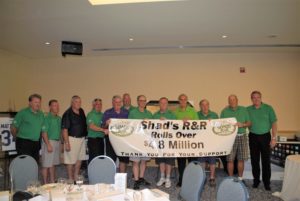 Grant McPherson, third from right, passed away New Year’s Eve 2018. He was a founding member of Shad’s R&R, the biggest charity golf tournament in the automotive aftermarket. He is seen here in 2017.

He was a co-founder of the biggest charity golf tournament in the country. He was also the head of Fram. But, most importantly, Grant McPherson was a friend to many across the automotive aftermarket.

McPherson, born in Winnipeg where he also played some football for the Winnipeg Blue Bombers of the CFL, started his career with Philips Electronics in his hometown. He moved to Stratford, Ont., in 1969 when he took on the position of national sales manager with Fram/Autolite. He spent 30 years with the company – along with a brief two-year stint at Dominion Automotive – wrapping his career as president of the filter and spark plug manufacturer.

“Grant was a first-class gentleman,” said John Vanstone, business development manager with Modern Sales in Barrie, Ont, who considered himself “fortunate” to work with someone like McPherson and other leaders of his time. “It was one of those things where you watch the old polished veterans in action that hopefully some of it rubs off on you.”

Though retired, he spent his later years keeping busy by working with local charities. He also helped start Shad’s R&R annual charity golf tournament 45 years ago and remained heavily involved with the group.

“Grant would always attend. He was just so enthusiastic about it,” said Brad Shaddick, general manager of Federal Mogul in Canada and chairman of Shad’s. His father was one of the original founders of the golf tournament.

Vanstone got to know McPherson better in the early 1990s when he started to work with Shad’s and McPherson was a board member. Vanstone eventually became chairman, but McPherson was always eager to lend a hand — he would typically arrive early for the tournament and offer to help in any way he could.

“He would work at the reception desk greeting people and selling tickets,” Vanstone said.

“He just had a fantastic sense of humour. He was sharp as a tack and always providing us with quick-witted humour and one-liners,” Shaddick said, adding that it was McPherson who got him his start in the industry at Fram in the early 1980s. “He had a very big heart. He was very kind to people.”

Shad’s the biggest single-day charity golf event in the industry, surpassing the $5 million mark in money raised for muscular dystrophy research in 2018.

McPherson was very much a product of his generation when business was done with a “slap on the back and handshake then go to the bar to have a drink to close the sale,” Vanstone said. “He was the sort of individual who looked a gruff bulldog on the outside but he was more like a pussycat on the inside.”

McPherson is survived by his five children and nine grandkids.

Have a Grant McPherson story to share? Tell us in the comments below.